More than 43,000 people responded to Everton Football Club’s second stage public consultation into proposals for a new stadium at Bramley-Moore Dock and a community-led legacy project at Goodison Park.

Across the two public consultations the club received more than 63,000 responses with Everton’s commitment to engagement and consultation having already been hailed as exemplar by leading experts in civic engagement, sports business and marketing.

The results from the second stage consultation, which will be released in November, will be used by the Stadium Development Team to further refine the club’s plans and form part of the planning applications for both Bramley-Moore Dock and Goodison Park.

The club remains on-track to submit both applications before the end of 2019.

Under ‘The People’s Project’ brand the club held their public consultation in two stages – November/December 2018 and July/August 2019 – generating the huge response from fans and residents from across Liverpool City Region and beyond, all offering their thoughts on the club’s ambitious plans.

The first stage public consultation saw 20,168 people respond, with 94% of people agreeing that Bramley-Moore Dock was an appropriate site for the new stadium and 95% backing Everton’s plans for a community-led led legacy at Goodison Park.

The consultation focused on the designs for a new 52,000-capacity stadium and the plans for transport, heritage and the environment as part of the project. The consultation also outlined design proposals for a community-led legacy project on the site of Everton’s current Goodison Park home.

The roadshow events were attended by more than 15,000 people and included a popular virtual reality experience giving users a chance to fly over the new stadium and place themselves in the centre circle and home stand on matchdays.

In addition to the events, the club also received responses through dedicated digital channels as well as a postal survey for residents living around Bramley-Moore Dock and Goodison Park.

Colin Chong, Everton’s stadium development director, said: “The interest and enthusiasm for The People’s Project has resulted in an unprecedented response to the consultation. We’re grateful to the thousands of Evertonians, fans of other clubs and people that don’t have an interest in football, who took part and shared their views with us.

“We have been busy working our way through the tens of thousands of comments and ideas and analysing the results which will inform our proposals as we progress to submitting our planning applications before the end of the year. 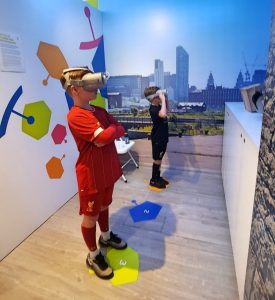 “We’ve been really pleased with the scale of response and how our approach to engagement and public consultation on this project has been recognised as exemplar by industry experts.”

The impact of The People’s Project, which includes a new stadium at Bramley-Moore Dock and building on and expanding the life-changing and life-saving work of the club’s official charity Everton in the Community through a legacy project at Goodison Park, were revealed in two independent reports by international property consultancy CBRE and socio-economic specialists Real Worth earlier this year.

They indicate that The People’s Project would deliver a £1bn boost to the city’s economy, the potential to create up to 15,000 jobs with £34m of income going to local families and an extra 1.4 million new visitors attracted to the city on an annual basis.

It is estimated the club (including the new stadium and Goodison Legacy Project) would be delivering £793.4m of societal value between 2024 and 2033, compared with £556m generated solely through Everton in the Community activity, showing how the new stadium and community-led legacy would deliver an additional £237m of social value to the Liverpool City Region.

TheBusinessDesk.com is holding a special lunch in partnership with Everton looking at the project.

Tickets can be booked here.