His actions come ahead of the region’s first Environmental Summit today, which will celebrate the past year of community environmental projects and activities.

Towards A Green Future: The first Environmental Summit for the Liverpool City Region’, is being held at Liverpool John Moores University.

It comes towards the culmination of the Year of the Environment 2019, where partners from across the Liverpool City Region have come together to support people and communities from all backgrounds to get involved in action to improve the natural environment.

The summit will also see publication of the University of Liverpool’s Heseltine Institute’s contribution to the Year of the Environment, “Towards a Green Future for Liverpool City Region”.

The report considers the environmental challenges faced by the city region and the country and looks at what can be done to face them.

Steve Rotheram said: “The climate emergency is a social justice issue and we know that it is always the most vulnerable who are worst affected by its consequences.

“We want to ensure that our actions reflect the concerns of everyone across our city region which is why, with our colleagues working on the Year of the Environment, we have spoken to thousands of people in recent months and we know what is important to them.

“People want access to affordable, environmentally-friendly transport, they are increasingly concerned about the quality of the air we breathe and they want access to open green spaces like parks, woodland and green walking paths.

“We are already working to address people’s concerns in these areas, with seven out of 10 of our buses already lower emission, our new fleet of trains for the Merseyrail network on the way and work starting on our 600km cycling and walking network.

“Just last week we published our city region clean air strategy and we’re leading the way on clean energy like hydrogen, wind and our Mersey Tidal Power Project. And I’ve also called on the next government to provide the £200m we need to be able to build homes on our ex-industrial brownfield sites.

“But there is much still to be done and every one of us has to step up and play our part.

“That is why I am announcing a Liverpool City Region Climate Partnership to co-ordinate our response to the climate emergency and bring together all organisations that want to play their part in achieving the city region’s goal to be zero carbon by 2040 or sooner.”

“As a combined authority we’re already investing hundreds of millions across the city region to develop a greener economy and tackle climate change, but we also want to ensure that communities can get involved.

“That’s why I have announced a £500,000 fund to build on this year so that our partners will be able to support more communities to engage in environmental activities.” 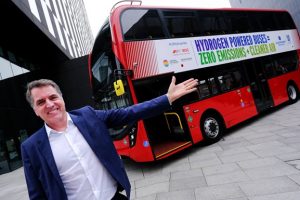 Gideon Ben-Tovim, mayoral adviser for the natural environment and chair of Nature Connected, said: “The success of the Year of the Environment, with thousands of people attending hundreds of event and activities, is testament to how much people care about their local environment, and how important it is to their lives.

“This event, our city region’s first Environment Summit, is vitally important. It gives us the opportunity to get together to take stock of where we are now and commit ourselves to what we need to do to tackle the climate emergency and protect our local environment.

“The establishment by the Metro Mayor of a Climate Partnership will help us to build on the momentum of our Year of the Environment and ensure that we collectively do what we can locally to address this global issue.”

Cllr Gillian Wood, deputy portfolio holder for low carbon & renewable energy, added: “Over the course of this Summer, through LCR Listens, the largest engagement exercise the combined authority has ever undertaken, we listened to more than 7,000 people, to find out what is important to them.

“The environment was second only to transport as an area of concern, with respondents citing specific issues around their local environment, including littering and poor air quality.

“The £500,000 that the combined authority is putting into supporting community activities will mean that more people than ever before can get involved in environmental projects in their local area.”