The two internal cores at Oxygen, the new luxury residential development from Property Alliance Group, have reached their highest point.

Main contractor Russells Construction has completed both cores, which house the development’s lift shafts, and which reach to 32-storeys and 16-storeys, respectively, from basement to roof.

The structure, in Store Street, Manchester, is the tallest single building that Russells has built – surpassing Axis, a 27-storey residential development in Manchester’s Albion Street – and its largest high-rise residential scheme, creating 379,485 sq ft of space.

Three individual, but interlinked towers, will provide 372 one- and two-bedroom apartments with a further 12 family townhouses at street level.

The finished scheme, designed by Jon Matthews Architects, will include a spa, gym and pool, plus 35 basement and surface car parking spaces. Outside there will be a double-height ground-floor retail unit in Tower 1.

The towers themselves are also coming on apace. Tower 1 has passed its halfway point, with the team now working on level 16 of 32. Tower 2 is currently at level 12 of 16, and Tower 3 at level 9 of 10.

Four tower cranes, including one at 120m high, are now installing the precast cladding, which will be closely followed by the glazing units as part of a progressive programme.

Director, Gareth Russell, said: “With the cores having reached their highest point we can now see the full extent of what an impressive building Oxygen will become. 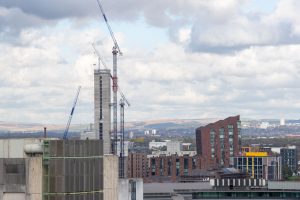 “The team is doing a fantastic job managing a multi-faceted construction programme across separate three towers within a tight 3,300 sq m footplate in a busy part of the city centre.”

Developer Property Alliance Group has already sold 76% of the units off plan.

Alex Russell, managing director, said: “We’re pleased to see such great progress being made, especially given the complexities of the build.

“Oxygen will add to Manchester’s growing portfolio of impressive residential schemes and is set to become one of the highest specification buildings ever built in the city. Not only does it offer high-quality homes, but five-star leisure facilities for residents.”

City landmark building lined up for £35m conversion to hotel

Property firm unveils latest sites that could lead to more than 1,000...