Everton FC has recorded a loss of £111.8m after interest and tax for for the 13 months to June 2019, against a £13.1m loss the previous year, despite achieving its second highest revenue total.

But chief executive Prof Denise Barrett-Baxendale said the loss was not unexpected and is part of the club’s long-term investment strategy to strengthen the team and build a new £500m stadium on the banks of the River Mersey.

She said: “The set of accounts released today reflect our ambition and position as a club in the early stages of an investment programme.

“We have been aware of, and planned for, the impact the investment would have on our short-term profitability and this is part of a long-term sustainable business plan that demonstrates our commitment to operating in a financially sustainable manner.

“Thanks to the support of our majority shareholder, Mr Moshiri, we have been able to invest significantly in our first-team squad.

“Looking forward, investment in a world-class new stadium at Bramley-Moore Dock offers us all an insight into the future of our club and underlines our ambition to take the club forward.”

After finishing eighth in the Premier League, the club received £24.9m in merit payments and also saw an increase in the total broadcast revenue to £132.7m.

Commercial revenue from sponsorship, advertising and merchandising grew by 40.6% from 2018, reaching a record £29.1m.

It was a season in which the club announced several commercial agreements, including an extension with official training ground partner, USM Holdings.

And chief finance and commercial officer, Sasha Ryazantsev, revealed that the club has “entered into a new £30m arrangement” with USM which allows it to enter into a naming rights contract for the club’s proposed new stadium at Bramley-Moore Dock.

Ms Barrett-Baxendale said: “During the 2018/19 financial year, we expanded our partnership with USM further by extending the tenor of the contract, increasing its value and offering USM an extended package of rights.

“Today, we are delighted to announce the club has entered into a £30m new arrangement with USM, in addition to our existing relationship.

“USM purchased an option that enables them to enter into a naming rights contract for our new stadium in Bramley-Moore Dock at a pre-agreed annual value and term.

“This innovative deal secures additional commercial revenue for the club and the option premium we are due to receive will be exclusively used as the club’s further contribution to the project’s equity.”

“Mr Moshiri demonstrated his continued financial commitment to the club through the shareholder loan which now totals £350m and has been used to invest in players and facilities.”

During the year there was significant investment in the first-team squad, including the signings of Richarlison, Lucas Digne, Yerry Mina, Bernard and Andre Gomes. 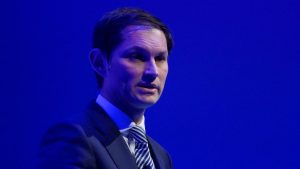 Mr Ryazantsev added: “The club’s net debt reduced by £56.6m to £9.2m in 2018/19 thanks largely to the continued substantial support of the majority shareholder.”

Mr Moshiri was an absentee from the annual meeting, on a mission to explore funding options for the new stadium.

Ms Barrett-Baxendale explained that he was “in negotiaton, exploring one of the long-term (stadium) funding options available to us”.

Everton last month submitted a planning application for its proposed new ground and Ms Barrett-Baxendale said the club could move swiftly and begin construction this year, if its plans are approved.

She said the club is “cautiously optimistic” about starting work this year, adding that Everton will be “prepared to move quickly” on a three-year build if approval of the planning application is passed.

“We have a robust plan, we have the right team in place and we have prepared extensively to mitigate all possible risks, giving us the best possible platform to succeed.”

Liverpool FC embarks on a journey with Expedia