A popular North West burrito bar business is aiming to set a new record by hitting £1.5m of sales this year from its three sites.

Listo translates as “ready” in Spanish.

And since its relaunch the brand reported bumper sales of more than 15,000 during January, a five per cent improvement on the same period last year.

The business, which was founded in 2013, operates on Liverpool’s Dale Street and has restaurants on Manchester’s Oxford Street and at Manchester University Students Union.

It has succeeded in winning a loyal fan base and maintaining its popularity in a crowded, casual dining marketplace, with queues frequently stretching out its doors.

Roger Taylor said: “Our burritos are booming – the relaunch was a huge success and we had queues lining the streets on opening week. Despite it being a short month for us due to the refurb and relaunch, we were thrilled to see that our sales were actually higher than the same time last year.

“We know people love what we do and keep coming back for more, so we’ll continue to work hard at what we’re doing.

“It’s an important message that people know – we’ve only changed our name due to trademark reasons. Nothing else about our operation has changed other than a slight ‘face lift’. I’m still operating with my fantastic team and local suppliers.”

He added: “We put a significant part of our success on being a small independent chain.

“We care about our customers, value our staff and we promise a fresh product at a fair price.

“We give back to our surrounding communities and have partnered with local homelessness charity, The Booth Centre, to donate a percentage of our January sales to them.”

The business provided a similar offer to Liverpool-based homeless charity The Whitechapel Centre.

Mr Taylor said: “Our business model is simple. We’ve learnt that it’s key to heavily research each opportunity, control the set up costs of each site and invest in building the brand, whilst support our existing sites before we explore new outlets.

“Both of our Manchester sites are in price-sensitive areas where our customers, both office workers and students, want a bang for their buck burrito.”

Sales have been helped by the launch, last year, of an app, which is now approaching 10,000 downloads. 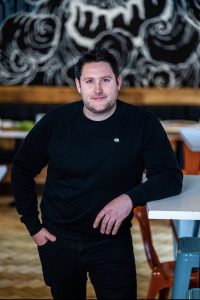 Mr Taylor said: “Technology is really changing how people order, decide, and dine, and it is enhancing eating experiences, so we need to ensure we are communicating with our customers and reaching them where they are so we are front of mind when they are considering dining options.”

While vegan food was boosted during ‘Veganuary’, people are choosing to eat plant-based and meat-free foods all year round, which is seen as a key opportunity, he said: “Although our meat options far outsell are vegetarian offering, we have to monitor what might attract new diners.”

And expansion would help the business to hit its £1.5m sales targets. Mr Taylor said he is exploring opportunities for new sites around the North West, within student unions, as well as the delivery market.

Award winning chef to bounce back with new restaurant