Liverpool Metro Mayor Steve Rotheram has described the Government’s cut in pandemic funding for the region a “disgrace” and said he hoped the decision wasn’t politically motivated.

Speaking in the second online press conference by himself and Greater Manchester Metro Mayor Andy Burnham, he said the second tranche of government funding for fighting COVID-19 was unfairly weighted, with deprived communities, mainly in the North of the country, getting less than other areas with far less need.

On April 30, TheBusinessDesk.com reported that Liverpool Mayor Joe Anderson was calling an emergency budget meeting after the Government cut COVID-19 funding for the city.

He said the “scandalous” cut in financial support to Liverpool’s attempt to tackle the COVID-19 crisis will cost lives.

And in today’s online conference Mr Rotheram also criticised the Government’s decision, which he said will hinder the region’s attempts to recover, economically, from the effects of the pandemic. He said the combined impact of the cuts in the second tranche of financial support will cost Liverpool and Manchester a total of £137m.

He said: “This risks our economic recovery.

“For the second tranche of funding to be spread out willy nilly – our areas are £137m down – it’s damaging our ability for a recovery and damaging our economies.

“For councils to have had the rug pulled from under their feet is a disgrace.

“I would hate to think there is a party political motive behind this.

“The Government can’t continue to hit our councils with austerity.”

Figures on the difference in funding

Andy Burnham also touched on the funding cuts: “The Government removed the deprivation weighting in the COVID-19 grant funding allocation. The virus has targeted the most deprived communities aggressively.”

He said there is a clear North/South divide in infection rates among communities.

Both Metro Mayors held the online conference to press their ‘Build Back Better’ campaign in a bid to “re-set” the region as it emerges from the pandemic lockdown. It followed a telephone conversation last Friday between Prime Minister Boris Johnson and the ‘M9’ group of metro mayors.

They said the campaign provides the opportunity for the regions to build a better economic future by taking the positives from the past three months.

Mr Rotheram said: “This is more than just a slogan.

“For me, it means two things: How do we fix things that we know are wrong with the economy pre-pandemic, for example a regional unbalanced economy; and how do we build on the good things, such as flexible working and potecting our planet?

“Building Back Better is an economic necessity in a post-COVID economy.

“We need to get this right if we want to avoid a modal shift to stop people moving from public transport and going back into their cars, and businesses shutting with a return to mass unemployment.”

He said different areas have been affected differently by the pandemic and will require different packages during the post-pandemic recovery and called on the Government to recognise these needs, such as levelling up the rewards for frontline heroes like care staff, shop workers, refuse workers and postal workers.

“Many of those essential staff don’t get the real living wage. After we have beaten the virus there can be no more kicking the can down the road. We can start by giving the carers the pay rise that they deserve.”

Andy Burnham echoed the need for a better care system, saying: “This weekend we will be thinking about the country and how it was 75 years ago.

“When they were celebrating the end of the war they were also getting ready to vote in radical change to health care in this country.

“Similarly, we should demand radical change in how we provide care. There is an opportunity for an NHS-style care system.”

As part of the Build Back Better campaign, the region’s two LEPs are calling on businesses to pledge their support to help effect change to how the world of work now evolves post-pandemic.

Lou Cordwell, co-chair of the Greater Manchester Local Enterprise Partnership, said: “We have been given a rare chance to step off the treadmill and consider our lives.

“This is our chance not to go back to normal, but forward and better.”

And Laura Pye, visitor economy champion on the Liverpool LEP board, added: “We are keen to work with businesses to create a plan for everybody.” 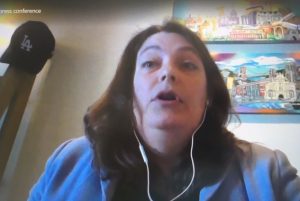 The visitor economy is worth about £4.9bn to the Liverpool City Region and she said if the pandemic lasts until the end of June it will have cost the economy £1.3bn.

“The leisure and tourism sector will be one of the last to come out.”

She said there is a need for ‘localism’ which involves how the region can work together to support local businesses, as well as developing cultural entrepreneuriship and digital innovation, which will be key to move forward.

Mr Burnham said: “We’re encouraging people to sign up to the Build Back Better campaign. Change is inevitable, and we have to make sure that change works for people.”

Paul Brown, chief operating officer of Manchester-based Public Sector Plc which works with local authorities on improving public services, welcomed the metro mayors’ initiative, saying: “Build Back Better is a hugely important initiative from Andy Burnham and Steve Rotheram and demonstrates the strength we have in the North when our great cities work together.

“We simply cannot go back to the old way of doing things when COVID-19 has given every single person in Greater Manchester and Liverpool City Region a hugely important moment of clarity about what we value most and made us realise that, when it comes to the crunch, we value frontline workers more than footballers and supermarket staff more than supermodels.”