Steve Rotheram, Metro Mayor of the Liverpool City Region, has today (July 24) published Building Back Better, an ambitious economic recovery plan for the whole of the city region.

The £8.8bn proposals are supported by leading figures from the worlds of business, academia, the social economy, the public sector and trades unions.

The plan, which has been submitted to central government, sets out how £1.4bn in investment could unlock £8.8bn of projects to begin in the next 12 months.

Those projects would create 94,000 permanent jobs, with a further 28,000 jobs in construction.

The plan shows how economic recovery will be delivered, across four strategic themes and with concrete, costed projects and programmes of work.

The four themes – the business ecosystem, people-focused recovery, place, and a green recovery – are all underpinned by a tangible commitment to Build Back Better.

The plan sets out clear asks of government supported by robust evidence.

The city region has, in the past 10 years, reduced its unemployment rate from well above, to just below, the national level; developed an internationally-popular culture and visitor economy; seen its universities act as major investors and civic leaders; expanded its port; developed a fast-growing social economy and progressed internationally-recognised strengths in material science, infectious diseases control and high performance computing.

Steve Rotheram said: “This pandemic has rocked us all and we still face tough times ahead, but my ambition to build a globally competitive, environmentally responsible and socially inclusive economy for the whole of our region remains undimmed.

“Before COVID-19 the city region’s growth rate of 3.5% was much higher than national levels, with well-above average productivity growth based on 10 years of strong economic progress. We will build on these solid foundations.

“Alongside our strengths we know that we still face hugely significant underlying challenges in health, education and skills and economic inactivity in our communities.

“Our recovery plan is focused on tackling these challenges and supporting the people of our city region – tackling inequality, creating jobs, supporting businesses, driving innovation, building new homes, and giving people the skills they need to fulfil their ambitions.”

He added: “The challenge ahead is beyond the capabilities of any one city region, or any one organisation, to deal with alone.

“It is only by working together, with all of our partners across the city region and with government, that we will prevail and Build Back Better than ever.”

Building Back Better is a plan for the whole Liverpool City Region and has been developed in a collaborative process involving partners from a wide range of sectors, as well as public engagement.

The plan has identified nearly 40 fully-costed, shovel-ready interventions, which would create more than 120,000 jobs in total.

In addition, the plan details medium- and long-term projects that could play a key role in the recovery, including the Mersey Tidal Power project, which would use the city region’s unique assets to contribute to the UK’s long-term sustainable energy mix, while creating thousands of jobs.

The next stage of MTC’s expansion in the city region, following a combined authority-funded £15m expansion into rapidly reconfigurable and digital production lines, focuses on innovative excellence in modern methods of construction (MMC).

The first phase is to develop new, more efficient methods for housing retrofitting. Concept design has begun with support of Torus and Peel Group and can be mainstreamed into the above retrofit programme. Phase 2, which features in the medium-term pipeline, is a comprehensive approach to new methods of modular construction – building homes like building cars – and will include a skills and development centre as part of the skills system locally, building on the MTC’s highly-regarded skills and training centre in Coventry.

“Using the expertise and experience of the MTC, along with our proven track record of supporting government organisations to deliver successful projects, the project is building the infrastructure that is required to deliver new capabilities to the area.

“Importantly, these capabilities will synergise to provide new, high-quality homes and build communities, at scale, up to 50% faster with an estimated 33% reduction in cost.

“With backing from academia and supply chain companies the project will deliver a greener, more eco-friendly future for construction with thousands of new homes on the horizon.”

An industry-backed research and technology organisation leading collaboration across some of the largest companies in the global glass industry, together with academia and government.

Glass manufacturing practices are currently responsible for around two million tonnes of CO2 per annum in the UK alone and the 90,000 square foot facility will be centred around a 30 tonne/day low carbon demonstration furnace. 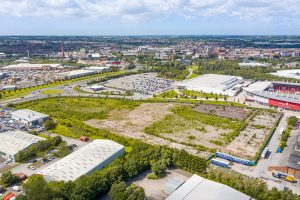 Adrian Curry, managing director of Encirc, one of the UK’s major glass container manufacturers with substantial production facilities employing more than 1,400 people in Cheshire and Northern Ireland, said: “I am delighted to see the experimental Glass Futures pilot plant and research facilities coming closer to fruition in St Helens, with its inclusion in the Liverpool City Region’s economic recovery plan.

“Increasing our global competitiveness and environmental sustainability is more important now than ever before.

“Glass Futures, the global centre of excellence in glass for R&D, innovation and training supported by leading glass manufacturers across the world, their supply chains and five of the UK’s most important universities, including the University of Liverpool, is an incredibly important development for the world’s glass industry.

“Glass Futures is a game changer leading to substantial improvements in manufacturing methodology, enhanced automation and increased efficiencies whilst targeting the removal of CO2 from the manufacturing process, significantly enhancing sustainable growth in the Liverpool City Region.”

Liverpool City Region is perfectly positioned to exploit the potential of hydrogen as a path towards a zero-carbon economy.

This is in addition to the scalable renewable energy generation capacity, which could fuel hydrogen production, significant latent demand for hydrogen for industrial fuel switching, and geology that could provide large volume sub-surface hydrogen storage and similarly carbon capture utilisation and storage within the depleted Irish Sea gas fields. 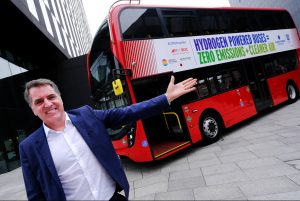 The first phase of this strategy, the procurement of 40 hydrogen buses and a hydrogen refuelling station in Halton which could be delivered for £27.8m, is to be operational by late 2021.

This would introduce a fully hydrogen-powered ‘green route’ on a specific existing service that passes through several Air Quality Management Areas (AQMAs), is close to an existing Liverpool City Region hydrogen manufacturing plant, and in proximity to an emerging cluster of hydrogen fuel companies

Frank Rourke, UK country manager, INOVYN, said: “Green recovery is a key element of this ambitious economic recovery plan and the Liverpool City Region is perfectly positioned to exploit the potential of hydrogen as a path towards a zero-carbon economy.

“Low carbon hydrogen can be used for heat, decarbonisation of industry, and transport fuels as well as contributing towards energy security.

“The city region has a long history at the forefront of this industry – we’ve been making hydrogen in Runcorn for more than a hundred years – and the burgeoning hydrogen economy has a key role to play as we build an economy for the future.”

The Shakespeare North Playhouse is a once-in-a-lifetime project for Knowsley and will celebrate the area’s fascinating links – via the Earls of Derby – to Shakespeare himself. 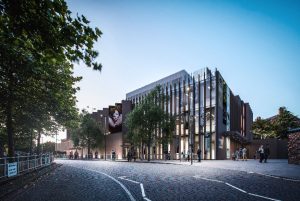 Currently being built in Prescot, and opening in 2022, it is a flexible theatre with capacity for between 320 and 472 seats and will provide a wide ranging and contemporary programme of events and performances, along with an educational offer to engage and excite young and old.

The theatre is already having a positive impact on Prescot through new private investment in the town, new bars and restaurants opening, and, of course, new homes being built.

The Playhouse will also bring huge benefits to the whole of Knowsley and the wider city region through cultural and educational opportunities, as well as the creation of a unique visitor attraction.

DCMS will be engaged on existing and new recovery funding lines for an additional £3m to secure the project’s construction delivery, noting the continued ambition for culture to lead Prescot’s revival. 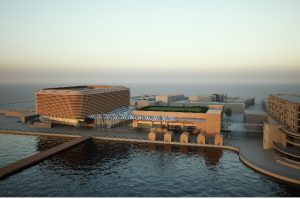 There is also a plan to replace Southport’s existing theatre and conference centre to add £25m per annum to the local economy and catalyse the transformation of the town centre, culminating in a new ‘Southport Square’. The scale of the project, and the impact it can create, requires a greater public investment than £25m.

In partnership with Unilever, plans are being developed for an internationally significant, open access innovation centre focused on the commercialisation of innovative sustainable packaging solutions. If successful the centre would enable the UK to further anchor itself into the global £1 trillion packaging market.

Building Back Better sets out an evidence-based, concerted, responsive and co-ordinated effort to co-design and co-fund an integrated people-focused recovery programme across employment, skills, health and inequality.

It is proposed to work in partnership with government on the following programmes:

All projects can begin in the next 12 months.