Everton has unveiled its first away kit from technical partner hummel – a classic amber and blue design inspired by the second strips worn by the Toffees in the late 1960s and early 1970s.

This year marks the 50th anniversary of Everton’s seventh league championship, which saw players wearing the much-loved amber away strip as Harry Catterick’s side claimed the 1969/70 title with two games to spare.

The new 2020/21 amber Everton away shirt features hummel’s iconic chevrons in blue across the shoulders and sleeves, and slick blue piping on the sleeves.

It also has a contrasting neckline in blue, creating a clean and minimalist look that complements the style of the popular 2020/21 home strip – which last month became Everton’s fastest ever selling home kit.

In a tribute to the Everton teams of the early 1970s, the back-of-neck of the new away shirt features a retro EFC scroll detail.

The blue shorts feature the hummel chevrons in amber contrast on the outer leg and the kit is completed with dark amber socks with blue chevrons on the front. Both the shirt and shorts are finished with a tonal badge detail.

The 2020/21 away goalkeeper’s kit continues the home kit’s theme of bright and bold colours. The striking pink and black strip features the same soundwave graphic as the home kit.

Alan McTavish, commercial director at Everton, said: “In this striking, yet classic Everton design, we’ve worked with hummel to create a strip that we think will appeal to Evertonians – hummel have shown a real desire to understand our passionate fanbase and from the retro EFC scroll on the back-of-neck to the modern cut, this kit honours the traditions of our club, while also taking a contemporary approach that is truly bespoke and original.”

All of Everton’s kits form part of hummel’s ‘More Than 11 campaign’, which recognises the important role fans both locally and around the world play in supporting their team.

Allan Vad Nielsen, hummel’s chief executive, said: “We know how fond Everton fans are of amber and blue away kits, so we decided to keep the design simple and classic, and let the iconic colours speak for themselves.

“The timing was also ideal, with 2020 marking 50 years since hummel’s first association with Everton, and the club’s 1969/70 league title victory. 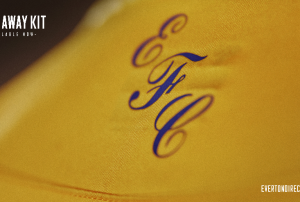 “We are very excited to bring Everton’s proud history and their first association through Alan Ball with our brand together in a modern design that remains true to the original. We hope it will be received well by supporters around the world.”

Everton captain, Seamus Coleman, said: “As players we are all interested in what our kits are going to look like, and I am really impressed with this strip. It is very modern but is also a great tribute to the players from the late 60s and early 70s.

“As Everton players it’s always important to know and understand the history of our great club and this kit pays tribute to players that every Evertonian looks up to including Alan Ball, Colin Harvey and Howard Kendall. The retro EFC scroll design on the back of the neck is a nice touch and I am sure Evertonians will love this kit as much as the players.”

Everton midfielder, Tom Davies, added: “The colours of amber and blue go together really well and are probably the first colours Evertonians think of in an away kit. I’ve always liked a retro look and this shirt pays tribute to some of the best teams in our club’s history.”

The 2020/21 Everton hummel away kit is available to order online from 8am today, or to buy in store at Everton One and Everton Two from 10am.