Following a competitive tender, Willmott Dixon will build the £93m state-of-the art campus that will provide young people across Greater Manchester with a centre of excellence for media, creative and digital industries.

It represents the first phase in LTE Group’s estates strategy that will lead to a total £140m investment for The Manchester College and UCEN Manchester and transform the city’s education provision.

The new campus, located opposite the Manchester Arena and Manchester Victoria Station, is the first of a two-phase vision for the site and will become home to the college’s Industry Excellence Academy for Creative and Digital Industries as well as UCEN Manchester’s Arden School of Theatre and Manchester Film School.

“The new campus is the catalyst for growth in education and skills and a fantastic opportunity to create a legacy for the people of Greater Manchester for generations to come.

“The investment comes at a time of economic and employment uncertainty, but this transformational project will underpin the development of the region’s thriving media, creative and digital industries and will stimulate job creation and new company start-ups across the North West.

“The project also injects immediate investment into the North West construction industry, its supply chain and into new apprenticeship opportunities which, in the current climate, is more important than ever.”

The new city centre campus is the first phase of one of the largest co-created and co-funded projects the post-16 education sector has ever seen, in what is a funding collaboration between LTE Group, Greater Manchester Combined Authority, Greater Manchester Local Enterprise Partnership and Manchester City Council, alongside commercial backing from Santander. 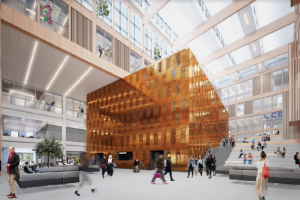 The Jewel Box, one of two planned industry-standard theatre facilities

John added: “This is one of a series of investments the group is making to support the Greater Manchester industrial strategy, inclusive growth and local communities, and it wouldn’t have been possible without the help and support of our much valued partners.

“Their backing will help us to transform the city’s education and training provision and will ultimately benefit one million Mancunians over the course of its lifetime. We very much look forward to celebrating the start on site with a ground breaking ceremony later in the year.”

Lisa O’Loughlin, principal at The Manchester College, said: “The new campus encapsulates our vision to provide learning that is focused on industry excellence.

“Students will benefit from specialist facilities that will support and enrich our courses, all designed and delivered in partnership with leading employers.

“By providing this industry-focused provision, young people and adults across the city will be well positioned to access highly-skilled careers in the digital and creative sectors.”

Anthony Dillon, managing director for Willmott Dixon in the North, said: “This new college campus is a real statement of intent which will position Manchester as the UK’s leading centre of learning for industries that will help shape a dynamic future economy for the UK.

“The UK is a world leader for creative and digital technology and this college will ensure it stays that way for many generations to come.”

Mo Isap, co-chair of the Greater Manchester Local Enterprise Partnership said: “This incredible development will play a huge part in Greater Manchester’s future as we build back better, enabling young people and residents from all backgrounds to have the opportunity to access higher education courses with cutting edge facilities and helping them move into skilled jobs in the digital arts, media production and broadcast industries.”

Cllr Luthfur Rahman, executive member for culture, leisure and skills, Manchester City Council, said: “It will be great to see this new campus start to take shape, contributing to the city’s recovery from the impacts of the pandemic and making a visible statement of investment in our young people’s future.

“The fact that the new campus will be a centre of excellence for training in some of the fastest-growing sectors in the city means that it will help equip young people to seize the opportunities being created and support our work and skills strategy.”

Phase two of the city centre project will see the creation of an Industry Excellence Academy for Business, Financial and Professional Services on the same site, subject to the securing of additional funding.

It says this site presents “a further development opportunity in a thriving, growing and successful city”, in which the group is already developing several high-profile projects. 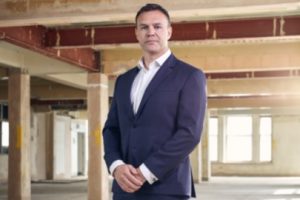 The group notes the deal gives it the option to either refurbish or redevelop at a total end price based on phased payment of about £10m.

It will gain vacant possession of the building following relocation of Manchester College, part of The LTE Group, in late 2022.

Prior to this, Henry Boot will receive rental income from the college while working on the project’s redevelopment plans. Subject to planning, the site could have capacity for up to 170,000 sq ft of development.

Ed Hutchinson, managing director of HBD, said: “This is an exciting addition to the group’s development pipeline.

“The building offers flexibility in its redevelopment and we look forward to progressing our plans, as we continue to play our part in the regeneration of Manchester.”

Region aims to pioneer modern methods of construction to boost...