New Liverpool away kit in nod to city’s cultural heritage

Liverpool FC has today revealed the new Nike away kit for the new season (2020/21), which is now available for limited pre-order online.

This season’s away jersey makes a bold statement with its vibrant teal and black colourway, designed to embody the unique attitude and confidence of Reds fans around the world and draw on cultural references from across the city of Liverpool.

The Liverbird, an iconic symbol across the city, and the club crest, heavily influence the colour and is a theme that has been carried through from the home shirt to tie the two kits together.

The swirling pattern on the front of the jersey takes its inspiration from Anfield’s Shankly Gates.

A textured print to the touch, the design also nods to Liverpool’s strong musical roots and the flyposters often found around the city to advertise local music events.

On the nape of the neck, the 96-emblem encased by the eternal flames sits proudly in memory of the 96 children, women and men who lost their lives at Hillsborough.

Liverpool FC captain, Jordan Henderson, said: “I’m a massive fan of the new away kit. I really love the design and how it has been influenced by the city and specific aspects of the club. I can’t wait to get back out there and play in it next season.”

The kit launches as part of Nike’s ‘Tell Us Never’ campaign for the 20/21 season, which encapsulates just what it means to be undeniably Liverpool FC – always surmounting the impossible and striving for success.

Bringing to life Liverpool’s deep-rooted love for the music scene, well-renowned DJ and broadcaster, Lil C features centre stage on the away kit campaign images, along with local talent, Niloo and Harper. 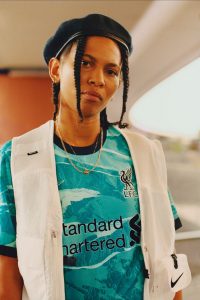 Lil C’s love for Liverpool FC is lifelong and has been fostered through her relationship with her mum who is a die-hard Liverpool FC fan.

One of Lil C’s favourite Reds moments is the 2005 Champion’s League final, a final that defied all expectations and is a true ‘Tell Us Never’ moment.

“First and foremost, we set out to create a collection that celebrates the rich culture of the city of Liverpool and the club.

“The away kit allowed us to be bolder and more expressive in how we brought some of these cultural references to life and we’ve landed on a look and aesthetic that really reflects that.”

The new kit is available for limited pre-order online now and will go on general sale for purchase in store and online from Monday, August.

United score a second quarter win with revenues and profits both...