Everton FC used the club’s signing of James Rodriguez this week to boost its global reach.

Iconic landmarks across three continents were used as a canvas to celebrate the signing of one of the world’s most popular footballers.

The 2014 FIFA World Cup Golden Boot winner, who has won silverware playing for clubs in Argentina, Portugal, Spain and Germany as well as individual awards in France, is hero-worshipped in his Colombian homeland and across the Americas with nearly 100m social media followers.

His arrival at Everton from Real Madrid has made waves across the globe.

His arrival will add to Everton’s pulling power to football fans across the US and Latin America, the club making clear its commitment to developing a strong dialogue with Latin American football fans by making the announcement in both Spanish and English.

Just 48 hours after the announcement of the Colombian international’s signing, the coordinated physical, digital and social media, marketing and PR activity has reached more than 400 million people.

A fitting showcase for a player with one of the largest social media following of any sportsperson on the planet and hailed as ‘Colombia’s Maradona’, the marketing activity builds on the club’s existing programme of activity and engagement in North and South America, with James’ signing now accelerating its overall international growth strategy.

Goodison Park, and The Royal Albert Dock, one of Liverpool – and the UK’s – most visited tourist attractions, were lit up with giant projections of James in his new colours, while the huge digital advertising screen opposite Liverpool Lime Street station in the city centre also featured animations of Everton’s sensational new arrival.

The colossal Colpatria Tower, the tallest building in Colombia and located in the centre of Bogota, dazzled in blue and glistened with the number 19 to reflect James’s new Everton shirt number.

Times Square, the major commercial intersection, tourist destination and entertainment centre in Midtown Manhattan, New York, also received the James treatment as many Tri-state Evertonians made the journey to see the player’s image in an Everton shirt among the spectacle of advertising that sees nearly 400,000 locals and tourists pass by per day.

Visitors to Miami Beach were met with a digital boat displaying graphics of James’s signing.

With many Floridians coming into the centre of Miami to celebrate Labor Day, the advertising vessel sailed through Miami Beach, South Beach, Nikki Beach, and round South Pointe Pier, passing the many high-rise office and residential developments up to Belle Isle.

The signing of James, who will add guile, craft and big game experience to Everton’s first team, also gives the club an opportunity to bring forward many of its strategic international plans, for which it had already started to lay the groundwork.

The club has plans to open its first overseas office in the USA. The new office will house marketing and sales staff and is likely to be located in either Southern California or Florida.

Prior to the global pandemic there had also been plans for pre-season friendlies in both North and South America. 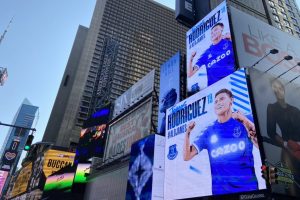 Among a range of other activity, the club has sought to connect directly with its overseas fans with the launch of new Spanish and Portuguese language Everton social media accounts.

Richard Kenyon, director of marketing, communications and community, said: “The announcement of James Rodriguez as an Everton player is, of course, a huge moment for us in terms of growing our international profile, particularly in the US and South America.

“James’s popularity in these territories represents a brilliant opportunity for us – and fits perfectly with our international strategy and the associated marketing and engagement activity which had already begun in these areas.

“To mark James’s arrival – and to build a strong platform for future activity – we needed to ensure we created a big impact globally and we’ve used a range of tactics to do this – including extensive social media and digital marketing activity and targeted outdoor advertising.”

He added: “We have been really pleased by the reaction we have seen already and excited by the prospect of what’s ahead, including establishing our first international office in the USA.

“Everton is a big club with big ambitions globally – having James on board will undoubtedly help us achieve them more quickly.”

Sportswear group signs with Premiership side Newcastle in latest kit...