Hut Group shares to be priced at 500p, giving an overall valuation of £5.4bn

The Hut Group has today announced the offer price for its London Stock Exchange flotation this month.

Shares will be priced at 500p per share, which will give the Manchester-based online retail giant an approximate valuation of £5.4bn, which includes £920m from new shares.

In an investors’ note published yesterday (September 9), investment bank Liberum said, post-flotation, it believes THG could achieve a valuation range of between £7bn-£7.5bn.

Further to THG’s announcement on September 3, Dragoneer Investment Group has entered into a cornerstone agreement with the company to subscribe for £50m of shares at the offer price, taking the aggregate commitment from cornerstone investors to £615m of shares at the offer price, consisting of a commitment of £300m from BlackRock, £100m from Janus Henderson, £90m from Merian, £75m from QIA and £50m from Dragoneer.

Immediately following admission, the company intends to have a free float of at least 20% of the company’s issued share capital.

A pricing statement is expected to be published on, or around, September 16, with conditional dealings in the shares expected to start on the London Stock Exchange on the same day.

Admission of the company’s shares is expected to occur, and unconditional dealings in the shares on the London Stock Exchange are expected to begin on, or around, September 21. 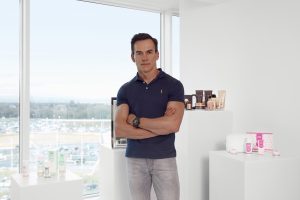 The Hut Group was founded in 2004 by Matthew Moulding and John Gallemore.

Burnley-born Moulding studied industrial economics at the University of Nottingham before going on to qualify as a chartered accountant. His father was a tarmac contractor and his mother was an antiques trader.

He went on to work at phone company the Caudwell Group, where he became finance director of the distribution business, working directly with John Caudwell.

Moulding launched The Hut Group with a £500,000 investment – inspired by buying a CD online – with a focus on entertainment products such as music and gaming.

By 2009 it had topped the Sunday Times Tech Track 100 league table.

It embarked on a series of brand acquisitions and in 2014 began construction work at Omega, in Warrington on a one million square foot logistics and manufacturing operation.

Further brand acquisitions followed, including Hale Country Club and Spa in 2016, then, in 2018, its international expansion took off with the opening of an 800,000 sq ft fulfilment and manufacturing centre in Poland, coinciding with its success in the Queen’s Award for Enterprise International Trade category.

Last year it started building THQ and THG ICON, a $1bn office and studio development next to Manchester Airport.

The Hut Group is now one of the world’s largest online retailers in beauty and nutrition powered by THG Ingenuity, its all-in-one growth platform combining ecommerce tech, hosting, translation, and a complete fulfilment infrastructure.

The group trades in 169 countries, dealing in 31 languages and 39 currencies.