A vintage football shirts retailer has moved to new headquarters to accommodate its growth, with sales on track to rise by 25% this year and staff numbers increasing.

Classic Football Shirts, which was founded in 2006 by student pals Matthew Dale and Doug Bierton in their final year at the University of Manchester, has invested £4.5m in a new warehouse and offices in Hyde, Tameside.

The company, which has 87 staff and expects its workforce to increase to around 100 this year, was previously based on Edwin Road near the Etihad Campus in Manchester.

The company’s new base spans 70,000 sq ft and is more than twice the size of its former HQ.

Following its move and due to its growth, Classic Football Shirts has appointed accounting and business advisory firm Hurst to provide assurance services.

Anthony said: “We are delighted to be working with Matt and Doug as their first audit firm.”

The company sells pre-owned vintage and rare football shirts as well as clearance ranges of kits from clubs across the world. Its website also features a collection of players’ match-worn shirts.

Recently it began selling US sports shirts, including ones from the NBA, the NFL, the NHL ice hockey league and Major League Baseball.

Matthew said demand is increasing due to the boom in online shopping as well as the rise in home working, as people dress more casually.

In addition to its online channels, Classic Football Shirts has stores in Manchester’s Barton Arcade and Brick Lane in London’s East End, with plans to open an outlet in Liverpool.

Arsenal fan Matthew and Manchester United supporter Doug, both 35, were in the final year of their management degree course when they combined their passion for football and business to set up their venture.

Matthew said: “At the time, lots of people were selling football shirts at the time but not really on a professional basis. We decided to go for it, thinking we had nothing to lose. 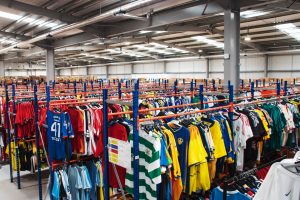 “We bought as many shirts as we could with our credit cards and things took off from there.”

As well as British and European club shirts, the retailer sells kits from teams in countries further afield, including Ghana, Indonesia and Zimbabwe.

Matthew said: “People love collecting rare and vintage shirts. They buy them to wear themselves and as gifts for friends and family. They are often buying a piece of football history.

“Sales have been growing as online shopping has increased and as more and more people work from home and, therefore, feel they don’t have to wear a suit.

“We are thrilled to be up and running in our new larger premises. The move means we are well-prepared for continued future growth and we are delighted to welcome our new members of staff to help us meet increasing demand for our shirts.”