Russell WBHO has commenced work on the £40m heritage refurbishment of the iconic Municipal Building in Liverpool’s Dale Street.

The Grade II-listed former council office is being transformed into a four-star hotel by developer Fragrance Group.

The two-year project will see the creation of 179 guests suites across the ground, first and second floors.

The restaurant, bar and the hotel reception will make the most of the incredible ground-floor atrium, with meeting and conference facilities throughout the basement and ground floor.

A new-build bronze clad extension at the rear will house additional bedrooms and the new spa complex, complete with first floor pool, gym, and treatment rooms.

The stunning Victorian building dates back to 1868 and was home to Liverpool City Council from its completion until the authority moved out in 2017.

Its renovation and extension has been designed by renowned Liverpool-based architects Falconer Chester Hall, with whom Russell WBHO has been working closely over the past year.

Gareth Russell, joint managing director of Manchester-based Russell WBHO, said: “The project team has worked hard to develop a scheme which respects the magnificence and heritage of the building and will allow it be re-energised and brought back to its former glory.

“Similar in scale to recent heritage schemes we have delivered in Liverpool and Manchester, we have assigned an award-winning specialist team which has the knowledge and experience to ensure the very highest quality restoration – the building is in the very best hands.”

The 17,000 sq m building is constructed of sandstone with a rock-faced granite plinth and projecting three-bay pavilions to each of the four corners, with French-style curved roofs, and a clock tower at the centre of the Dale Street elevation.

There will be minimal intervention on the external elevations.

Internally, the wealth and scale of historic features within the building to be protected and restored include decorative vaulted and coffered ceilings, friezes and marble fireplaces depicting reliefs of Liver Birds and Queen Victoria, tile dados resembling polished parquetry, a former muniments (title deeds or other documents proving a person’s title to land) room with metal window shutters and a striking basilica-like main hall, make its restoration an exciting challenge.

Alastair Shepherd, Falconer Chester Hall director, said: “The conversion of such an iconic building requires a sensitive refurbishment and we are honoured to have been entrusted with its restoration.

“The highly decorative spaces and existing window patterns are integral to the new design and dictate the division of rooms across the scheme, and we have sought to protect and enhance these features as part of the character of the new hotel.

“Modern additions will complement the existing fabric, with the new four-storey extension at the rear providing a sympathetic juxtaposition to the existing Victorian structure. 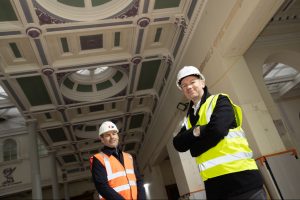 “Its modern bronze-clad design will allow a clear demarcation between the original listed building and the new, and will provide the ideal home for the luxury new facilities to be on offer in this stunning four-star hotel.

“Along with Russell WBHO, and with the support of Liverpool City Council, we have taken time to unravel the secrets of the building, getting to grips with the existing structure and uncovering hidden features.

“Working with the existing features and spaces will help create a unique new offer to Liverpool’s hospitality scene and we’re confident the rooms, spa, restaurants and bar will be a massive international draw when complete.”

Acknowledged as one of the leading players in the regional hotel market, having delivered in excess of 2,300 rooms over the past decade, Russell WBHO has also developed a strong reputation for major heritage refurbishments.

The team is responsible for the conversion of the Grade II-listed Chapel and Crosshall buildings for Vita Student directly opposite Municipal, and is undertaking all of the heritage refurbishments within Manchester’s NOMA regeneration, including the £35m restoration of the award-winning Hanover building in 2018.

Martin Rogers, managing director Fragrance Group UK, said: “Russell WBHO’s reputation for high-quality delivery of large scale listed building refurbishments, together with their vast experience of hotel developments, gave us confidence to bring them on board for this important project.
“Together, Russell WBHO and our architects FCH have proposed an exciting and ambitious programme to bring this incredible building back to life over the next two years, as a place that can be enjoyed by everyone.”