The King Street restaurant is the only Manchester city centre establishment to be honored with a Michelin Bib Gourmand in this year’s list and to receive the accolade for five consecutive years.

El Gato Negro, Manchester, is led by head chef Milan Sojka, for whom this is personally a second accolade, having also steered the King Street restaurant to success in 2020.

Introduced in 1955, the Michelin Bib Gourmand list puts a spotlight on restaurants for providing “exceptionally good food at moderate prices.”

Providing further cause for celebration, sister restaurant Canto was also listed by the prestigious guide.

Launched in September 2018 in the heart of Cutting Room Square, Ancoats, the Mediterranean tapas restaurant has, under the tutelage of creative director and chef patron Simon Shaw, and head chef Carlos Gomes, quietly established itself as one of Ancoats’ best restaurants and bars, loved for its laidback atmosphere and consistently good small plates, said the company.

Simon Shaw said: “In what has been such a tough year for everyone, to get the news that we have been awarded a Michelin Bib Gourmand is incredible and has given all involved a real lift.

“It is one thing to be awarded a Michelin Bib Gourmand, but to keep it is massive and a real testament to the work of Milan and the team.

“To see Canto listed alongside El Gato Negro is something else. To be recognised by the Michelin Guide in such a short space of time is a great achievement and, hopefully, something we can build upon from here. 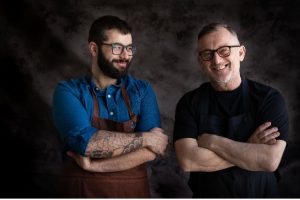 “He’s not a fan of the spotlight, but this is deserved recognition for Carlos, and I couldn’t be more pleased for him. It’s exciting to think what we could continue to achieve.”

El Gato Negro can be found on King Street in Manchester, Park Row in Leeds and in Exchange Flags, Liverpool.

Sister restaurant Canto is located in the heart of Ancoats on Cutting Room Square.

Plans for Shaw’s fifth restaurant, a new Middle Eastern concept, remain in the pipeline with a 2021 launch confirmed.

Sandwich-maker extraordinaire opens his own outlet in MediaCity