The £100m scheme will include 330 highly sustainable, smart homes, retail space and amenities, as well as significant investment in the surrounding infrastructure – activating and regenerating the historic waterfront.

The project will also provide a crucial link in the development of the riverside from the ‘Three Graces’ and Princes Dock, to the proposed site of the new Everton FC stadium.

The new neighbourhood, along with the regeneration of Central Docks and the wider Liverpool Waters area, will bring much needed economic growth and new job creation to the area, extending the prosperity of Liverpool city northwards.

The proposals include a mix of one-, two- and three-bedroom apartments designed to attract a mix of occupants from busy professionals to young families, with the combination of a vibrant new neighbourhood and the tranquility of the waterfront setting appealing to many.

To reduce net emissions, each new smart home will include power usage monitoring and solar panels will be fitted to all common areas. There is also investment to encourage the use of electric cars, with 20 EV charging stations proposed.

Plans are under way for selected occupiers such as hairdresser, beauty salon, delicatessens with alfresco dining, bike rental stores and other resident-friendly retail outlets.

The proposals also include substantial investment in high quality and innovative public realm.

The proposals are adjacent to plans for a new cultural square that will be used for public events and activities including music and entertainment.

These new public spaces will be available for use by new residents, the existing community, business users and visitors, alike.

When the currently derelict site is transformed it will provide a vital link between the existing and planned developments within Central Docks, including a new park and the new Isle of Man Ferry terminal – currently under construction.

The site is also situated on the recently completed Jesse Hartley Way boulevard that links the new ferry terminal to the city centre.

The proposals, that include new riverside walkways and a suspended bridge, will enable complete access for pedestrians and cyclists along the entire historic waterfront from Liverpool city to the proposed site for the new £500m Everton FC stadium at Bramley-Moore Dock, in North Liverpool.

Greg Malouf, Romal Capital co-founder, said: “We are very excited about this scheme and its potential to transform this barren brownfield land into a thriving new waterfront neighbourhood. 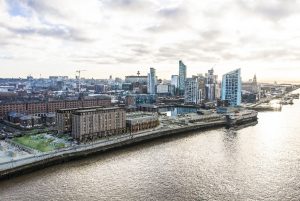 “The combination of new smart homes, carefully selected retail and leisure, and huge investment in new public realm, will deliver not only a high quality lifestyle for its residents, but also ensures much needed world class connectivity.

“Over the last few years we have engaged with, and listened to, a range of stakeholders and in response we have made adjustments to our proposals.

“The heights of some buildings have been reduced, the make up of residential units is more diverse to attract more families to the area, and designs have been revised to better reflect the area’s long maritime history and historic appeal.”

He added: “The economy of Liverpool, and in particular North Liverpool, needs to grow and the regeneration of this site, and the entire waterfront, will play an important part in delivering the much-needed growth.

“We have seen regeneration in other areas such as the Knowledge Quarter in the east and the Baltic Triangle just south of the city centre, and we now need activity that will expand the prosperity of Liverpool northwards. New high quality homes on this brownfield site means new jobs, greater investment and, ultimately, more people to enjoy this waterfront location.

“We hope this scheme acts as both a major catalyst and benchmark for future development within the area.”

Darran Lawless, director of development for Peel L&P’s Liverpool Waters, said: “This development, being brought forward by Romal Capital, will provide much needed high quality new homes on this brownfield site and create a fantastic new neighbourhood within Central Docks.

“It will also provide critical links between neighbouring developments, including the Isle of Man Ferry Terminal, and key sections of the waterfront. With the proposed investment in new public realm, we can improve access for all and bring life back to this historic waterfront.”

The HMO specialist who started his property business with a terraced...

Energy provider signs up for Circle Square workspace and retail...