Under-fire fast fashion firm Boohoo has submitted plans for a new Leicester factory at Thurmaston Lane on the site for a former car showroom.

The retailer, which continues to face allegations of poor pay and working conditions, will create 95 jobs in the city and revealing plans for a new office, warehouse, factory and an education hub which will offer industry-led programmes as well as a platform for local fashion students to show off their work.

The new facility, at 301 Thurmaston Lane, is being designed by Manchester firm architecture:m. It 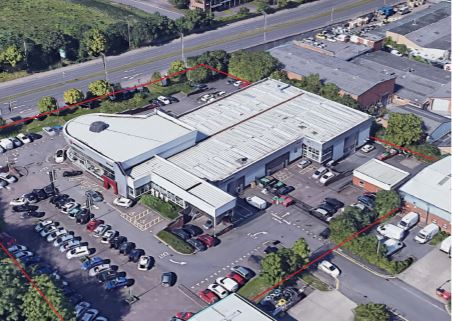 Where the new Boohoo base will be

describes Boohoo’s scheme as: “A location to which an education centre can operate and offer services relating to the processes associated with the site company, a gallery to which student works from neighbouring universities and local colleges can showcase fashion and artwork, community spaces and facilities in
which meeting/conferences spaces will be available on demand and co-working spaces set up for charities and trade association.”

The new development will see the existing building split into three major sections. These three sections are split between office and research, manufacture and quality control and warehouse storage.

Next to this will be a new 16,000 sq ft unit housing offices and a warehouse.

A spokesperson for Boohoo said: “The factory will be an example of best practice in garment manufacturing and we are working with many local stakeholders to ensure that the site adds value to the local community, beyond creating good quality new jobs for local people.”

Boohoo has been the subject of controversy for almost a year over its dealings with Leicester supplier, which led the firm to move on a new city base.

Earlier this month, it was revealed that Boohoo was facing a possible import ban after allegations that its suppliers were using slave labour.

Last summer, it was revealed that Leicester textiles factories could be behind the surge in cases in the city which led to it becoming the first in the UK to be subject to a localised lockdown by the government.

A report from Labour Behind the Label, entitled Boohoo and Covid-19, alleged that conditions in Leicester factories, which it says primarily supply Boohoo have been putting workers at risk of Covid-19 infections and fatalities.

The report suggests that some textile factories in Leicester had been operating as normal throughout the lockdown because of sustained orders from their biggest customer, Boohoo.