The family home of England World Cup winner and Everton legend, Alan Ball, will be auctioned this month.

A two-bedroom semi-detached house in Farnworth, Bolton, will appear in an onine sale by auctioneer Pugh, with a guide price of £69,000.

Alan Ball was the youngest member of England’s 1966 World Cup-winning team. He also played for Everton, Blackpool, Arsenal, Southampton and Bristol Rovers during an illustrious career, before managing Manchester City.

Born in the house in 1945, a blue plaque on the front of the property funded by the soccer star’s former clubs was unveiled in 2008 to celebrate Ball’s Bolton heritage.

A former Farnworth Grammar School pupil, Ball had trials with Bolton Wanderers as a teenager but was rejected when coaches told him he was too small.

The 5ft 6in midfielder eventually began his career with Blackpool, before being transferred to Everton for a then British record fee of £110,000.

He won a League Championship title with the Merseyside club in 1970 and collected 72 England caps during a 10-year international career. He later managed clubs including Southampton and Manchester City. 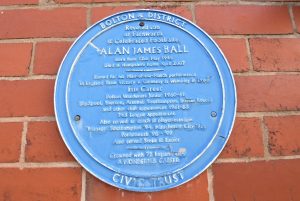 The plaque on the front of the house, at 2 Brookhouse Avenue in Farnworth, says that he is famous for his man-of-the-match performance in England’s victory against Germany at Wembley in 1966.

Paul Thompson, managing director of auction house Pugh, said: “It’s a privilege to be auctioning a property with such strong connections to a national and local legend. By all accounts Alan Ball was tremendously proud of his Bolton roots and continued to live in the area even when he was a professional.

“The blue plaque marks this otherwise ordinary-looking house out as a unique property that is part of England’s football history and whoever the highest bidder is at our auction this month will be the proud new owner of a very special house.”

Since the onset of the coronavirus pandemic last March, Pugh has sold lots totalling more than £40m at its auctions, which have been held on the firm’s online platform.

Pugh’s next auction, featuring Alan Ball’s Bolton birthplace among land and property lots across the UK, will be held online on March 24.

City Round Up: strong results from Renold, Cussons – update on...