Liverpool FC has welcomed a new global partner, Kodansha, to the club as its official publication partner. The multi-year deal with one of the world’s largest publishers will see the club and Japan-based Kodansha work together to inspire young fans to harness their creativity and follow their dreams of achieving careers in the creative industry.

Reaching readers across 40 countries, Kodansha publishes a wide range of products, including TV and anime, magazines, picture books and novels and official merchandise. It is also a publisher of the popular comic and graphic novel series, Manga, which originated in Japan and was developed in the late 19th century.

Focusing on community outreach and the belief that ‘stories can inspire and change people’s lives’, Kodansha is teaming up with the club’s official charity, LFC Foundation, to launch ‘Creative Works’. Commencing this September, an employability programme will be delivered to a total of four cohorts of students from Liverpool John Moores University and local sixth form colleges and aims to inspire young people from challenging backgrounds to achieve careers in the creative industry.

Throughout the programme, participants will receive support and mentoring with creative skill building, CV and interview techniques, public speaking and confidence building and workplace expectations to prepare them to achieve their career goals. Working with seven creative organisations in Liverpool across various sectors, including theatre, media and gaming, participants could also be in with a chance of earning a work experience placement.

Billy Hogan, Liverpool FC chief executive, said: “As a football club, there are so many incredible stories throughout our history, stories that are retold and kept alive through the power of creativity and storytelling. They spark excitement, memories and imagination in our fans around the world. Through our partnership with Kodansha, one of the world’s largest publishers, we look forward to creating programmes which will help inspire future generations through creativity and storytelling.”

Yoshinobu Noma, president of Kodansha, said: “Having lived in the UK for quite some time now, I have a very special feeling about this partnership with LFC. Every single match that the team plays in front of their fans all over the world, incredible stories are created and shared, sparking joy and excitement. We want to harness that extraordinary power to inspire impossible stories and build a strong, successful partnership. Let us create stories that bring passion and ignite inspiration around the world, together.” 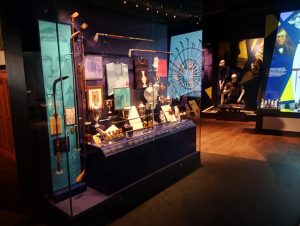 Part of the re-designed museum

Responsible for several key areas of the museum’s re-design Mather & Co worked alongside The R&A’s curators to develop fascinating storylines and themes, the 3D design of the exhibition, AV experiences and graphic design. The new design brings more interactive and digital experiences to the storylines than ever before, immersing visitors in the heritage of the sport and the amazing moments on the course.

Leanne Clydesdale, project interpretation designer at Mather & Co, said: “Working alongside the team from The R&A, we helped to develop The R&A World Golf Museum content, a project which has been fascinating and exciting. It has been a brilliant opportunity to work with a governing sport body, and together we have created a museum which is accessible to both golf lovers and new fans to celebrate the past, present and future of golf.”

Angela Howe, director-museum & heritage at The R&A, said: “Our goal, when developing The R&A World Golf Museum, was to re-imagine the golf heritage experience, making it appealing to established golf fans whilst attracting and educating those new to the sport. The refurbishment of the galleries provides a modern backdrop for people to learn about golf’s heritage via immersive, interactive and interesting exhibits.”

The fascinating collection of more than 16,000 items held in St Andrews tells the intriguing story of golf from its invention in Scotland in the 15th century to the global sport it is today. The entire collection is recognised as a Nationally Significant Collection, formally acknowledged as being of great importance to the life and culture of Scotland, and internationally significant. The museum is the most comprehensive golf collection in Britain and one of the finest worldwide. 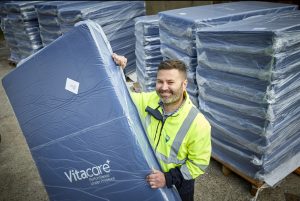 Adam Gittins of The Vita Group

The first 100 mattresses were delivered earlier this month and are being distributed to temporary accommodation providers across Greater Manchester, bolstering the city’s ability to house its hundreds of rough sleepers and families affected by the housing crisis. Shelter is working with Manchester City Council’s temporary accommodation provider, ICCG Services, to allocate the mattresses to temporary and emergency housing, so that people staying there have a clean, suitable bed to sleep on when they are most in need.

The Vita Group, based in Alderley Edge, has committed to donating a further 200 mattresses by the end of the year, bringing the total donation for 2021 to 300 mattresses, with a value of more than £50,000. The mattresses have been designed and manufactured to meet stringent fire regulations required in hostel premises.

Ian Robb, group CEO at The Vita Group, said: “Shelter’s work is instrumental in helping tackle the homelessness crisis in Manchester and we are incredibly proud of our team who have worked hard to manufacturer the mattresses, which can now be distributed to places most in need of them. At The Vita Group, we have always been committed to supporting local communities, and believe it is more essential than ever that businesses are looking for ways to help charities and organisations.”

John Ryan, Shelter’s HUB manager for Greater Manchester, said: “We are extremely grateful for The Vita Group’s support. We have so many people needing these beds at the moment and one of the biggest costs is trying to refresh mattresses. Vita’s donations allow temporary accommodation providers, who are already struggling for funds as a result of the pandemic, to provide more, clean beds to those who need them.” 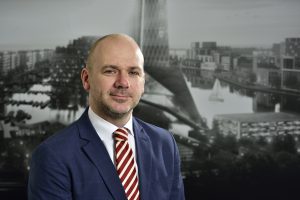 Two new funds have been launched to support businesses and community organisations in Liscard, Wirral, as part of regeneration plans for the town centre.

The Liscard Business Grant Scheme and the Liscard Community Grant Scheme have been set up to help transform Liscard town centre and support its long term future – with one-off grants of up to £10,000 available through both schemes.

Existing independent small or micro businesses and social enterprises in Liscard town centre, and those looking to expand or establish themselves there, can apply to the Liscard Business Grant Scheme. This grant is available to cover the costs of capital works which will contribute to regeneration and sustainable growth in the town, creating a more attractive environment and encourage more people to spend time there.

Wirral-based not-for-profit groups can apply for grants of up to £10,000 from the Liscard Community Grant Scheme. Proposals are welcomed from organisations which want to develop and deliver community-based projects to reinvigorate Liscard as part of the town centre’s regeneration programme. Priority will be given to eligible applicant organisations with existing links to the Liscard community.

The funding for the grants has come from Wirral’s allocation of £1m from the Liverpool City Region Combined Authority Town Centre Fund. Alan Evans, director of regeneration and place at Wirral Council, said: “These new grants are about recognising the importance of the high street and fostering pride in the community. We want to make Liscard more diverse and attractive to people coming into the town centre, by supporting projects which benefit the community and championing our independent traders.” 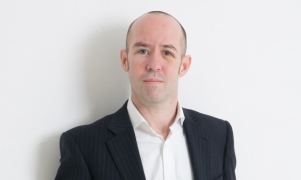 A logistics recruiter has warned that the loss of skilled drivers to retirement, combined with the impact of Brexit on non-UK-based drivers, means that the industry is at a crossroads.

Neil O’Brien, who runs Runcorn-based ‘wheels-to-door’ specialist D&D Recruit, currently has more than 200 driver vacancies on the agency’s books. While the national media has highlighted the shortage of drivers, especially HGV, he argues that it is not simply down to the lack of drivers, but also the bottleneck in the system of licenses and the perception of the industry itself.

He said: “We need to look at this carefully. The decline in workers – largely HGV drivers – is not real, they are there but they know their value. In essence, the impact of IR35 has been twofold: Qualified UK based drivers are holding out for increased pay; non-UK-based drivers have left here to work abroad.

“The reason why is relatively simple – effective tax rates and take-home pay. At D&D Recruit today we have a requirement for 200+ HGV class 1 drivers and yet we are having to work incredibly hard to fulfill that demand.

“Add into this the current retirement rates and lack of newly qualified drivers entering the industry and we have a delta effect that some say runs into tens of thousands annually. The lack of newly qualified drivers is, in part, due to the backlog of admin in terms of licenses being approved but also in terms of how attractive the industry is to work in. The industry is expanding but we all need to do more to position these careers as an incredible opportunity for the right candidates. That will take time, but in the meantime, removing the bottleneck on licenses for the new recruits will be a great first step.”