Liverpool architecture practice Studio RBA has been appointed by Darmody Architecture to monitor and provide support for the sign off on the final construction of the first phase of new apartments at Liverpool’s giant Tobacco Warehouse scheme.

The Royal Albert Dock-based practice will report to scheme designer Darmody Architecture, providing a quality control function as the next phase of homes are released to purchasers.

The scheme, by Dublin and London-based Harcourt Developments, will see the 1.6m sq ft building on Stanley Dock converted for a mix of commercial, leisure and residential uses.

Adam Morgan, of Studio RBA, said: “It’s a pleasure to be involved with such a prominent Liverpool landmark.

“Darmody Architecture have designed light and spacious homes that allow the building’s inherent qualities to shine and signing off each new apartment is a journey into Liverpool’s future.”

The development sits at the heart of the emerging Ten Streets district, designated to provide room for Liverpool’s thriving tech and arts sectors to grow, and across the dock from the city’s famous Titanic Hotel.

Tim Darmody, of Darmody Architecture, welcomed the appointment, saying: “The team at Studio RBA have a very keen eye for quality and they will play a key role in ensuring buyers enjoy the very highest standards of fit out and finishes.” 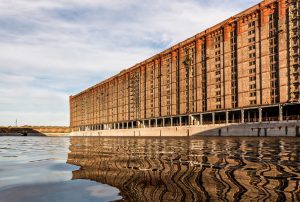 The Grade II-listed warehouse was the world’s largest brick-built structure at its opening in 1901, using 27 million bricks.

It was purpose-designed to store bales of tobacco, which were stacked two high and left to cure for up to three years.

The tobacco would then be moved to nearby factories in Vauxhall and Everton for final processing.

First tenants revealed after signing up at Hyphen building