New details have been unveiled on the conversion of Liverpool’s North Western Hall to a Radisson Hotel following the appointment of an interior design consultancy to the project.

Manchester-based Koncept ID has secured a contract with Deansgate Contractors and will work alongside Radisson Hotel Group and a leading independently-owned European fund manager with extensive real estate experience to convert the 1871 Grade II-listed building.

The new hotel will be the latest edition to the Radisson RED brand – a concept developed to appeal to a millennial audience through art, music and fashion.

One of only three Radisson RED hotels in the UK, with more to follow, the Liverpool destination is directly linked to Lime Street Station and will offer 201 rooms, including five suites on the upper floors.

Thanks to the building’s central atrium, the entrance is flooded with natural light and features grand arches, pillar and ceiling details.

Ground floor public spaces will incorporate a lounge area, meeting rooms and multifunctional break out space for guests to check in and feel at home. There is also a restaurant situated on the ground floor with the impressive double height space.

The basement contains a meeting and conference area with breakout space and coffee bar, along with separate gym facilities. Originally used as staff quarters, this area is double height with vast archways and will feature exposed brickwork and concrete finishes.

Koncept ID will manage the interior design of the £20m+ project. Radisson RED Liverpool is due for completion in the first quarter of 2022.

Jenny Denton, lead designer, said: “North Western Hall is one of Liverpool’s most iconic landmarks and thanks to its central location and direct access to the train station, the hotel has the potential to become a real destination for the city.” 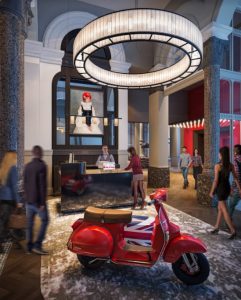 Paul Scott, associate designer on the project, said: “As a design team, we’ve been spoiled with a winning combination of stunning period features and an exciting design brief. Radisson RED hotels bring a serious dose of style and attitude to a city and with such a thriving culture already, Liverpool is the ideal home for the newest addition.”

Nathan Hooper, project manager for Deansgate Contractors, said: “It has been a pleasure to work alongside Koncept ID and the Radisson Hotel Group in developing the vibrant design of RED Liverpool, and subsequently bringing that design to life within the remarkable Grade II-listed North Western Hall.

“Deansgate Contractors are passionately proud of this scheme which aspires to be the best hotel delivery that Liverpool has seen in recent years.”

Raul Ara, vice president of construction and technical at Radisson Hotel Group, said: “Koncept ID has developed a remarkable design for RED Liverpool in accordance with RHG standards which will create a fantastic hotel in an incredible location.”