More than 450 residential units were approved by Liverpool City Council planning committee this morning (November 9) – despite a party political fall out over Section 106 payments.

The row erupted over proposals to create 257 new apartments within two eight-storey blocks on Liverpool’s waterfront.

An application, by Barings/Glenbrook, proposes the build-to-rent scheme, which would be made up of 81% one-bed apartments, with the rest two-bed units.

The site is on land adjacent to The Keel, a former HMRC office block which was previously converted to residential use.

Councillors welcomed the scheme, which would create communal green spaces for residents, and include photo-voltaic panels on the roof of both units, built in a brick style to complement the nearby warehousing on the riverfront.

However, before a vote could be taken on the proposal, Lib Dem councillor, Pat Maloney put forward an amendment regarding a diminished Section 106 payment the council had accepted from the developers.

Section 106 payments fund improvements to the general community in the vicinity of a scheme, such as green spaces, public parks or walkways.

The proposal should have delivered a Section 106 payment of £767,000, but the developer argued this would make the scheme unviable, and, after discussions, agreed to pay £149,000, instead.

Cllr Maloney’s amendment called for the full Section 106 payment to be paid, saying: “Christmas is coming early for developers. It is not appropriate that the city should subsidise this development.”

But Labour councillor Joe Hanson, and his colleague and committee chair, Cllr Tony Concepcion, condemned the amendment, with Cllr Hanson accusing Cllr Maloney of “bringing politics into the proceedings”.

Cllr Concepcion added: “It is absolutely disgraceful the opposition party are using the planning process for political means.”

The amendment fell by seven votes to three. The original proposal was passed by seven votes, with two against and one abstention.

Housing group Torus proposes to build a £30m “flagship scheme” that would deliver 195 units on a rent-to-buy basis, on Lightbody Street, in Kirkdale, close to the city centre and adjacent to the historical Stanley Dock area.

The land had been allocated for industrial purposes but has received a £7m Homes England grant to create the residential scheme on the banks of the Leeds-Liverpool Canal.

It aims to tap into the Mersey Heat Network power scheme currently being developed by Peel NRE, part of Manchester-based developer Peel L&P.

Again, the issue of Section 106 payments was to the fore in the ensuing discussion. 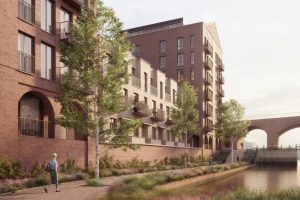 The scheme would have generated £570,000 of income from the developer, but the council agreed to waive the payment on the grounds it would make the proposal unviable.

Cllr Hanson raised his concerns that the local community would miss out on a valuable contribution to local amenities.

But the developer, and the council’s planning officer, John Hayes, highlighted the public element included in the plans, such as a public square in front of nearby railway arches and a community space and landscaped area.

The proposal was passed unanimously by 10 votes.