The Blackpool Civic Trust has given its backing to a £25m plan to save one of the town’s landmark buildings and convert it into an upmarket hotel.

On Tuesday a meeting of Blackpool’s planning committee will consider the proposal for the former 111-year-old post office in Abingdon Street. The old sorting office, with a frontage on Edward Street, is also part of the scheme.

In June the developer, Cheshire-based Ashall Projects, submitted a planning application to create a 148-room hotel which will employ around 70 staff. A further 215 people would be involved in building it.

Many of the key features of the post office, which is a Grade II-listed building, will be retained and restored. These include the post office’s façade and stained glass windows and the marbled flooring and cornicing inside. The famous eight red telephone boxes will also remain.

Members of the planning committee are being recommended to approve the proposal by their planning officers who believe it will “further regenerate and enhance the area and provide good visitor accommodation to support the town centre and the wider leisure economy”.

Last month members of the Blackpool Civic Trust met Mark Ashall – the director of Ashall Projects – and the scheme’s architect Matthew Branton, a partner with Franklin Ellis Architects, to discuss the plan.

Blackpool Civic Trust chair, Joan Humble who, as MP for Blackpool North and Fleetwood, campaigned against the post office’s closure in 2007, said: “We were extremely impressed by the architect’s vision for the hotel.

“It is vital this building is saved. It is an important and much loved landmark. There have been false dawns before, but having met the team behind this plan, we believe it will deliver.

“We are delighted at the developer’s commitment to re-purpose the post office and bring it back to life. Blackpool needs a high quality hotel to attract visitors. It is yet another sign that we can all be extremely optimistic about the future.”

Nigel Patterson, the trust’s planning officer and former general manager of the Winter Gardens, said the hotel’s design will create an “oasis of much needed green space” in a built up area of the town.

“I, like many other people, was a regular customer at the post office but never realised the size of the courtyard which separated it from the sorting office. The plan is for the courtyard to be landscaped with trees to create an area of greenery which will be most welcome.”

The aim of the trust, which was founded in 1975, is to “promote excellence and community spirit in Blackpool for people of all ages.” It is “interested in all things Blackpool, particularly its heritage and future for people”.

Mr Ashall said there is a stark difference between the condition of the buildings now and how the hotel will look when it opens.

“We are grateful for the trust’s support and we all realise that this is a very substantial and challenging project. Instead of being neglected and in danger of becoming even more of an eyesore, these buildings will enhance the town centre and help attract all kinds of visitors to Blackpool,” he said. 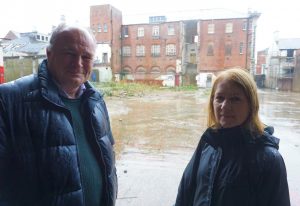 Mark Ashall and Joan Humble at the rear of the building

There are 150 Hotel Indigos across the globe, but Blackpool’s will be the first to offer this mix of accommodation.

A feature of the Indigo brand is that each property draws on the story of the local area, its history, culture, key landmarks and food.

Ashall Projects has considerable experience in developing and opening hotels, including the Aloft in Liverpool. The former Royal Insurance building, which was described by a national newspaper as a “dilapidated gem”, underwent a multimillion-pound restoration and won BCIA’s Building Project of the Year in the year it was completed.

“There are many similarities between our work in Liverpool and what we plan to do in Blackpool,” said Mr Ashall.

“The building there had been derelict for 20 years and was in such a poor condition that it had been placed on the National Buildings at Risk register. That’s hard to believe when you look at it now.”