Middleton-based building contractor J Greenwood (Builders) is marking its 50th anniversary by becoming employee-owned, providing a strong base for the ongoing growth of the business in a challenging period for the construction industry.

Established in 1971, the family-owned firm switched to Employee-Ownership Trust (EOT) status to ensure that its 50-strong workforce shared in the success of the business and benefited from future profits. The transition to being an EOT would also preserve the family ethos developed more than half a century ago.

Based on Greengate Industrial Estate, Chadderton, the contractor specialises in affordable housing, education, extra care, leisure, health, commercial and public building contracts for clients in the public and private sectors. Recently completed projects include a new £1m club house for Salford City Roosters Rugby Club and a £1.5m refurbishment project for the LTE Group at Harpurhey Manchester College to provide facilities for new commercial training kitchens for their hospitality and catering department.

The firm has also expanded into the provision of social housing, working with housing associations including Jigsaw Homes, Mosscare St Vincent and Great Places Housing Group and recently securing places on ICN and JV North, two major North West frameworks to support the delivery of new homes and social infrastructure. This ongoing expansion has seen 14 new employees recruited in the past 18 months, representing an increase of 30% in the workforce.

Advised by RSM, chairman John Greenwood transferred his shares in the business to an EOT for the benefit of existing and future staff. John Greenwood, managing director Adrian Rooney and health, safety and environmental director Darren Garner, make up the operations board to oversee the daily running of the firm. John Greenwood said: “The foundation of the Employee Ownership Trust is a fantastic outcome for the company, our people and our clients, and I’m certain that it’s in the best hands possible.

“I’m proud of the business we’ve built over the past five decades and I wanted to put in place a structure so that the company could continue to operate in its current form, with its current people and its current location. This may not have been the outcome if the company had been sold to an outside buyer or investment had come from elsewhere. I remain fully committed to J Greenwood (Builders) and look forward to working with our managing director Adrian Rooney and the rest of our talented team to help the company to thrive in the years ahead.” 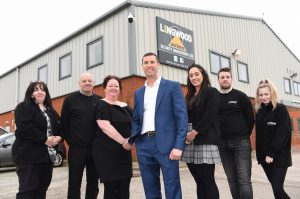 Alan Lingwood, (centre) and his team

A Heywood security management company has seen strong national expansion, taking on more than 100 staff and opening several satellite offices, following growth support from Boost; Lancashire’s Business Growth Hub. Over the past two years Lingwood Security has grown to more than 300 employees who are supporting a range of new contracts within Lancashire and across the UK.

The family company was established by ex-Royal Marine, Alan Lingwood senior, in 1995 and supplies guards, CCTV installation and monitoring as well as other services to sectors including rail, construction and utilities. His son Alan Jnr joined in 2000. When Alan senior retired from day-to-day involvement in early 2019, Alan Jnr was looking for support to grow the company. He was introduced to the Boost Bespoke programme shortly after, through Sue Denver at Winning Pitch who he already knew.

Alan Lingwood, now managing director, said: “When my dad retired, I was unsure on the direction I wanted to take the business. Boost has helped in a massive way to give focus and more confidence in sales and marketing. The support has been invaluable in pointing the business on the right track for sustained growth.”

Boost is Lancashire’s Business Growth Hub and is led by the Lancashire LEP (Local Enterprise Partnership) and Lancashire County Council and supported by funding from the European Regional Development Fund (ERDF). The Bespoke programme helps ambitious businesses to grow rapidly by determining and delivering the best support for them, whether that is through accessing new markets, boosting productivity or understanding the right financial options for their business.

Sue Denver, programme manager for Boost Bespoke, said: “Lingwood Security was a company with huge potential which just needed some additional help to structure their business for the growth they have experienced. Through the Bespoke programme, we worked with Alan and the team to understand how we could support. We decided practical coaching, as well as help to implement modern sales software which would underpin this new knowledge, was the way forward. It’s been great to experience the way the company has taken on board the support they’ve received and reaped the well earned benefits.” 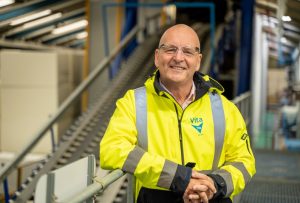 Flexible foam solutions provider, The Vita Group, based in Manchester, has partnered with German chemicals specialist, Evonik, as part of a pioneering mattress recycling programme. Evonik has used its expertise in polyurethane (PU) chemistry to develop an efficient chemical recycling process for converting flexible PU foams back to the original polyol raw material. Evonik’s new hydrolysis recycling process has the potential to achieve circularity in the flexible PU foam industry.

As the next phase of the development, Evonik will scale-up trials of its new process, which has been further strengthened by its partnership with The Vita Group. The Vita Group has trialled the recycled polyols from Evonik’s hydrolysis process in several of its flexible foam applications.

Some 40 million mattresses are discarded each year in Europe alone, with the majority ending up as landfill creating the equivalent of 600 kilotons of waste, including 300 kilotons of PU foam. With the potential to recycle the main component materials used in flexible PU foams and PU foam-based mattresses, Evonik’s process offers significantly higher use levels of the recycled polyol compared with existing commercialised technologies.

Evonik’s solution will contribute to the global flexible PU industry’s sustainability expectations of reducing waste and increasing the use of renewable raw materials in the production of its products. This enables Evonik to expand its position as a leading solutions provider for the PU industry and supports the entire Evonik Group’s objectives of establishing a fully functioning circular economy. 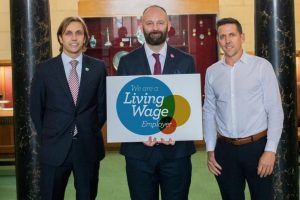 Salford is celebrating beating its target to become England’s first Living Wage City as the campaign celebrates 20 years of existence. The Salford Living Wage Action Group launched the campaign in 2019 with 38 accredited employers and aimed to see that rise to 62 by the end of 2021. Accredited employers not only pay their staff the real Living Wage, which is calculated to meet the true cost of living, but also commit to raising it each year and encouraging their supply chain to follow suit.

Business interiors suppliers Jenkinson’s and building contractors Schofield and Sons have joined 66 other accredited employers in the city – bringing the total to 68 as the city prepares to celebrate national Living Wage Week (November 15-21).

Salford City Mayor, Paul Dennett, said: “Salford was the first place in England to be recognised for its ambition to become a Living Wage City and as a council we are being proactive in raising standards in procurement to get the best value for people in Salford. Councillor Jack Youd holds a new executive support social value and procurement role which was created to push forward this agenda. These are the first two new living wage employers to be achieved through this new role and I’m sure Cllr Youd will be successful in securing more.

“We now need more businesses to follow their lead. Paying staff the real Living Wage, which is calculated to meet actual living costs, makes employees feel truly valued. It boosts morale and motivation, helps them focus on their job and that raises productivity. It also helps businesses retain and recruit staff, cutting costs and making them more efficient and profitable.”

Jenkinson’s is one of the country’s leading independent business interiors providers in the North West. And Schofield and Sons is a building contractors based in Monton, Eccles, which has been established in Salford for two generations.It has recently been awarded the contract for the restoration works at Buile Hill Mansion as part of the redevelopment works. 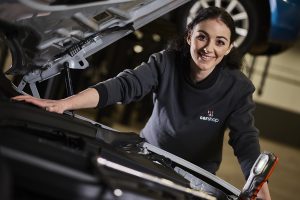 Used car retailer, CarShop Warrington, in Winwick Quay, has announced a major recruitment drive as it looks to bolster its team of talented technical colleagues. This follows a period of growth which has gone from strength to strength this year, launching its Buy Online offering, opening four new stores, including first-of-its-kind Express stores, and creating a new brand identity as the home of good carma.

Between 2020 and 2021, total sales have increased by an impressive 18% and the company has taken on more than 100 new colleagues. Now, there are a total of 22 positions up for grabs, with the vast majority of these situated on the preparation side of the business, such as vehicle technician, painter, prepper, de-prepper and SMART repairer.

Steve Whittle, head of business at CarShop Warrington, said: “Our store’s organic growth this year, supplemented by the post-pandemic surge in demand for used cars, has meant that we can now offer a huge number of opportunities to vehicle technicians of all trades across the region and I’m very proud that this is the case. We would especially like to hear from women, knowing how unbalanced the gender split in the technician industry is and being really keen to change that.”

Nigel Hurley, CEO at CarShop, said: “At CarShop, we do everything we can to support, encourage, develop, celebrate, reward and ultimately retain our staff because we know it is the only way we can stay the UK’s leading omnichannel used car retailer.

“We also know that it’s because of the commitment our technicians have for their trade that our customers feel in such safe hands when they buy from CarShop – and that’s something that can never be undervalued.”

Full steam ahead for maritime sector with £2m ‘first of its...

GDP ahead of expectations, but fears over a slide backwards due to...

Call for Clean Air Zone rethink due to issues over supplies of...