Plans to bring historic Buile Hill Mansion back into use will go on show to the public in December.

Proposals for the Grade II listed mansion will see it brought back to life as a community and wedding venue.

Downstairs a café will sit alongside community and heritage exhibition space and a function room. Upstairs on the first and second floor will be community meeting rooms and a flexible space for meetings.

Salford’s Registry Office will move from the Civic Centre in Swinton into the first and second floors to register births, marriages and deaths and provide a unique venue for weddings, civil partnerships, renewing vows and baby naming and citizenship ceremonies and associated celebrations.

New external ramps and an internal lift will be sensitively added to make the building fully accessible and a new car park on part of the depot site will serve the mansion, Buile Hill Park banqueting suite and the park itself.

Salford City Council and the Buile Hill Mansion Association have worked together on the plans which will go forward for planning permission early in the year. Once approved, work is expected to start on site later in 2022. 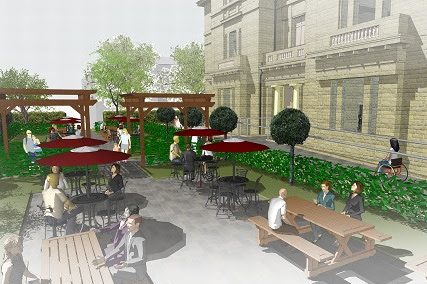 City Mayor Paul Dennett said: “I made a commitment to bring Buile Hill Mansion back into sustainable use and I’m delighted that we can now reveal the plans to do just that.

Jenni Anne-Smith from the Buile Hill Mansion Association, which was formed in 2018 to support re-opening the Mansion, said: “We are so excited that the plans are underway to restore the Mansion especially as they include all the elements the community asked for through previous consultations.”

Buile Hill Mansion was built between 1825 and 1827 for Thomas Potter, the first elected Mayor of Manchester.