Kinaxia Logistics is stepping up its driver recruitment programme with a series of measures designed to attract new entrants to the industry.

Announcing a raft of initiatives, chief executive Simon Hobbs said Macclesfield-based Kinaxia would not be seeking to lure staff from other companies with incentives.

Instead, the company is focusing on filling vacancies by recruiting newcomers to the industry, including veterans and ex-offenders, and offering its own warehouse staff the opportunity to switch careers.

Kinaxia has so far received nearly 200 applications for a recently launched, fully-funded driver training programme worth more than £3,500, which leads to a full HGV licence.

The company employs more than 1,600 staff across its businesses and has a fleet of in excess of 800 vehicles which transport goods for supermarkets and other retailers as well as the leisure, food and drink and manufacturing sectors.

The first cohort of recruits have begun their training under the scheme, including a coach driver who has changed career.

Kinaxia has launched a ‘Warehouse to Wheels’ initiative, enabling staff across its warehousing operations to apply for a Class 1 or Class 2 lorry driver’s licence, with training also paid for by the company.

The group is also funding its current Class 2 drivers to progress to Class 1.

Kinaxia has also registered to take advantage of a government funding package for new entrants to gain either Class 1 or Class 2 licences. The scheme began in mid-November and runs to the end of March 2022. The funding covers fees payable by applicants for their provisional licences and theory tests.

The group has previously announced a range of other measures to attract new drivers, such as increased salaries and bonuses, and an updated benefits package which includes a cycle-to-work scheme, discounts across a range of top brands for shopping, travel, motoring and days out, plus loyalty awards for five years of service and more.

Mr Hobbs said: “We need to bring in new entrants to the industry and, when they are ready to start their training and development with us, we will slot them into our family of businesses around the country.

“Our HR and recruitment teams are working flat out to screen the large number of applications received from candidates from a wide variety of backgrounds.”

He added: “We are keen to provide veterans, ex-offenders and others with the opportunity to join the industry.

“The HGV driver shortage is not just a UK problem. Other European countries have the same dilemma and are facing similar challenges.

“The situation in Britain has been compounded by Brexit, as a large number of people from overseas have left the country for good.

“COVID has had an impact on the industry, too. While on furlough, some drivers got out of the habit of getting up at 4am and spending days on end away from home, and opted to pursue different careers.”

He said: “For long periods during lockdowns there were no tests or training, which led to delays in new entrants being able to join the industry. Changes to IR35 have also led to people who set up their own companies ceasing to trade.

“The solution is to make the industry more attractive, to be more creative in the way we employ people regarding shift patterns, enabling to work part time as well as full time.” 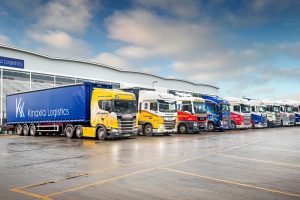 And he said the Government could do more to tackle the crisis as Britain grapples with a shortage of 100,000 drivers, a situation which may not be resolved for 12 months.

“The Government’s current tactics are not going to fix things at all. It has given work permits to drivers in the EU, but has received very few applications.

“Several months ago, the Government extended drivers’ working hours, but several companies, including ourselves, refused to adopt this measure on health and safety grounds.

“For the industry as a whole, I suspect it will be this time next year before the issue is resolved. Finding 100,000 drivers is a lot to ask.”

He added: “There are currently delays with getting medicals, provisional licences and test dates for new drivers, but the Government could help by taking more urgent action to tackle the hold ups and blockages which are hampering efforts to get these recruits on the road.”