Manchester United reported a £16.9m pre-tax loss in the six months to December 31, 2021, it announced today.

That compared with a pre-tax profit of £33.6m the previous year.

A second quarter pre-tax loss of £1.4m compared with a pre-tax profit of £63.9m the previous year.

Sponsorship revenue for the quarter was £35.2m, a decrease of £2.6m, or 6.9%, primarily due the expiry of the training kit deal at the end of May 2021, partially offset by global sponsorships.

Since the end of the reporting period, the club has ditched its commercial sponsorship deal with Russian airline Aeroflot, following Russia’s invasion of Ukraine.

Retail, merchandising, apparel and product licensing revenue in the quarter was £29.2m, an increase of £4.4m, or 17.7%, due to increased Megastore and e-commerce revenues. In contrast to the prior year quarter, the Megastore remained open to customers throughout the quarter and also benefitted from home games being played in front of full capacity crowds.

Broadcasting revenue for the quarter was £86.4m, a decrease of £22.3m, or 20.5%, due to playing four fewer home and away games across all competitions. For the six month period, broadcasting revenue was £129.7m, compared with £156.3m.

Matchday revenue for the quarter was £34.6m, an increase of £33.1m, or 2,206.7%, due to all eight home games being played in front of a full capacity crowd. All 10 home games in the prior year quarter were played behind closed doors due to pandemic restrictions.

Exceptional items for the quarter were a cost of £10m, which included compensation to former manager Ole Gunnar Solskjær and certain members of the coaching staff.

The club has also launched its Fans’ Advisory Board to create a new forum for strategic level dialogue with fans. It followed huge fall out with fans after United was one of six English clubs in the attempted launch of the ill-fated European Super League, which collapsed in April last year. 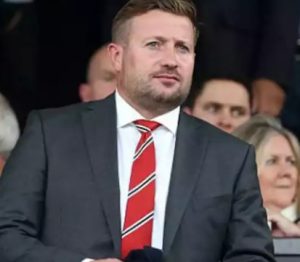 Richard Arnold, who was appointed as new chief executive on February 1, said: “Everyone associated with Manchester United should have belief in the opportunities that lie ahead of us, both on the pitch and in the way we engage and serve our fans.

“We have a clear vision and we are implementing a strategy to win with an empowered leadership team to drive that forward.

“We will foster a culture of excellence through a world class football environment, while strengthening the role of fans at the heart of the club and harnessing the power of Manchester United to make a positive impact on people, the environment and society.

“All of this will be supported by a sustainable operating model that ensures the club is strong for the present and secure for the future.”

Cliff Baty, chief financial officer, said: “For the second fiscal quarter of 2022, we achieved robust revenue growth of 7.3% despite the postponement of two matches in the quarter due to COVID-19.

“Results reflect the continued strength of our sponsorship revenues, supported by record breaking digital fan engagement, in addition to the return of more normalised Matchday operations. We look forward with optimism to the remainder of the fiscal year.”