And it said it has launched a trial home delivery service from 1,000 of its B&M stores.

The South Liverpool-based group was impacted by strong comparative figures from 2021 when the UK was still affected by pandemic measures.

Due to exceptionally high sales in April 2021, as previously disclosed, and the distorting nature of these comparatives, the group offered more insight into the LFL performance over the period, revealing that, over the five week trading period of April 2022, one-year LFL revenues were down 19.1%, driven by elevated sales in the prior year, and over the subsequent eight week trading period covering May and June one-year LFL revenues were down 1.6%.

Today’s figures showed that the Heron Foods division performed consistently well throughout the quarter, ahead of internal expectations, with revenues of £113m, up from £102m a year ago.

However, B&M said there are ongoing stock and cost discipline across all fascias.

It has launched an online trial by B&M UK with around 1,000 stock keeping units now available for delivery to home.

Russ Mould, investment director at Manchester investmeht platform, AJ Bell, said: “Value retailer B&M should have been in its elements as the country faces a stalling economy.

“Its cheap prices appeal to cash-strapped individuals who are watching every penny and people looking to trade down from more expensive retailers. However, a drop in sales would suggest this tailwind is not as strong as previously thought.

“The company argues that some of its sales figures were distorted by having very tough year-on-year comparative figures to beat. If you look beyond that trading period, the decline in sales hasn’t been as bad in recent weeks.

“Encouragingly, B&M has followed Primark by finally dipping its toe in the water when it comes to e-commerce.

“A home delivery trial has begun to see if there is enough demand for online purchases of bulkier and higher ticket items.”

He added: “That presents an opportunity to increase sales, yet whether such a service would contribute to profits near-term is unknown. Typically, online services need to run on a large scale to make money so even if B&M moves from a trial to a national roll-out, there is no guarantee the service will put cash in its pocket after paying for costs anytime soon.” 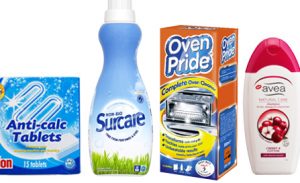 McBride, the Manchester-based cleaning products group, announced today that its banking group has waived its June 2022 covenant tests until September 30, 2022.

It said i reaching the agreement of the waiver, the group has agreed to maintain, in effect, the restrictions announced on December 22, 2021. These are that the group will continue to maintain liquidity – cash plus facility headroom – of at least £40m, and will not pay dividends until the group evidences compliance with its existing covenants.

McBride had approximately £75m of available liquidity as at June 28, 2022.

The group said it continues to explore and assess all avenues to maintain liquidity and create additional funding for the benefit of all stakeholders.

It said: “We are fully appreciative of the ongoing support that the banking group have and are continuing to give the group through this period of uncertainty caused by macroeconomic factors which have resulted in rapid and unprecedented rises in input costs and ongoing global supply chain challenges.

“The group continues to perform in line with market expectations and will provide a fuller trading update after the close of its current financial year ending 30 June 2022.”

Announcing its half year results in February this year, McBride admitted it faced “the most extreme inflationary cost environment probably ever to hit this sector”.