Michael Swanick joins as an associate solicitor, based primarily at the law firm’s Altrincham office. He qualified as a solicitor in September 2018, and since then he has represented a wide range of clients regarding private family law matters. Prior to joining Maguire Family Law, he worked at national law firm Shoosmiths, within the specialist family team.

Michael spent more than 12 years working in the regulatory sector before specialising solely in family law. This included the Legal Services Ombudsman, the Insolvency Service and the General Medical Council, where he was an assistant registrar and coordinated safeguarding functions.

He brings a wide ranging depth of experience to his role as a family associate and regularly advises clients on matters such as wealth protection on divorce, child residence and contact disputes, domestic abuse issues and cohabitation rights.

James Maguire, founder and director at Maguire Family Law, said: “Michael recognises that clients requiring advice on family matters are invariably experiencing difficult and life changing issues. With that in mind, he prides himself on providing clients with a calm and pragmatic approach to resolving their problems.”

James added: “Rachael is passionate about working with clients, so they feel reassured and supported throughout some of the most challenging times in their lives. She is particularly interested in helping to resolve arrangements for children. She has extensive experience with serious safeguarding concerns or where emergency orders are needed.”

Third of the new hires, solicitor Helen Royle, brings a wealth of experience from her time at Legal 500-ranked Slater & Gordon. Since qualifying in September 2021, Helen has exclusively practised in family law.

James said: “Helen has experience in all areas of relationship breakdown, including divorce and associated financial matters, separation of unmarried couples, arrangements around child custody and domestic abuse. Helen’s ability to work closely with clients and build their trust makes her a valuable addition to our team. She is regularly praised for her attention to detail, approachable and pragmatic nature.

“All three new team members will make fantastic additions to our firm and I warmly welcome each of them.”

The CEO of Manchester Central, Shaun Hinds, has been named as chair of national organisation, the Association of Event Venues (AEV), and is set to also play a pivotal role in an umbrella organisation which touches all corners of the industry.

Hinds was voted as chair at the trade body’s AGM earlier this month and will hold this role for two years. As an industry expert with more than 25 years of experience across travel, hospitality, property and business, he has been on the board of the AEV for several years. 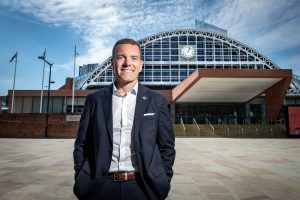 Alongside this new role, Hinds is also the incoming chair for the AEV’s umbrella organisation, the Events Industry Alliance (EIA), which represents the AEV, AEO and ESSA. This means that he is involved with all corners of the events sector bodies – venues, organisers and suppliers. He is due to start this one-year tenure in mid-October. These combined roles will see him support and lead the wider industry.

He said: “It’s a privilege to be able to work alongside esteemed colleagues from across the events industry as chair of the AEV and EIA. I’m proud that I can play my part in helping to support and shape things over the next couple of years and raise the voice of the sector’s fantastic achievements alongside lobbying on crucial topics to alleviate pressures as much as possible.”

Rachel Parker, AEV director, welcomed Hinds as the new chair of the association, saying: “His insight and experience have been great assets to the AEV board, and his unstinting work in support of the industry over the last few turbulent years has been an example to us all. I look forward to Shaun bringing his strategic insight and vision to the role, continuing the excellent work by his predecessor, Max Bull, executive director of the BDC.”

Alexandra Gavin and Josh Woollard join as senior planners at Lichfields’ King Street office, while Harry Russell, Abigail Knowles and Clover Long start as planners. They are joined by economics consultant Tom Harrison, who will be part of the office’s economic team. 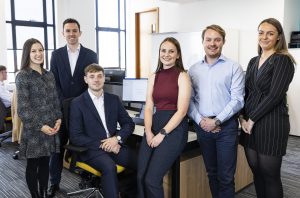 All six appointments will be working on a range of commercial, industrial, housing and leisure development projects alongside progressing business development initiatives across the Manchester and the wider North West of England region.

Now employing 22 at its Manchester office, the move comes as Lichfields continues to mark its 60th anniversary year and target fees around the £25m milestone by the end of 2022.

Simon Pemberton, senior director and head of Lichfields’ Manchester office, said: “The new appointments reflect our continued success and organic growth alongside the opportunity for career progression at Lichfields.

“Alexandra, Josh, Harry, Abigail, Clover and Tom will all be great additions to our team. They have some excellent experience, bringing even more depth to our services as we continue to grow off the back of a diverse, high quality client base and exciting portfolio of work.”

With the appointments the housing provider continues to create regular new apprenticeship opportunities for local people. FCHO has a track record of developing and retaining talented people, and several colleagues who started as apprentices as far back as the 1980s are still employed today. 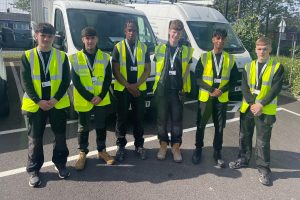 Dave Thomas joined FCHO through a carpentry apprenticeship in 1983, and has progressed through the business to the position of head of property care. He said: “I’m really pleased to see local people joining us through apprenticeship schemes. Learning a trade is absolutely invaluable and if you look at our industry, we rely on skilled people every single day to carry out the repairs and maintenance in our homes and neighbourhoods, making sure they are great places for our customers to live.”

While the six new recruits are in trade positions, the housing association isn’t only looking for apprentices in manual fields. In recent years FCHO has appointed people into a range of apprenticeships, from customer service to HR positions, with a variety of new roles set to be created over the coming years.

Donna Cezair, FCHO chief executive, said: “FCHO has always had a proud history of helping local people to kick-start their careers, whether this is through apprenticeship roles, other job opportunities across the business or our dedicated in-house employment service, Directions, which helps our customers find work, training or volunteering opportunities.”

UK and Ireland capital investor, BGF, has expanded its Manchester team with the appointment of Courtney Walker as investor.

Courtney joins from Clearwater International, where she worked as an associate in the M&A team, advising on deals ranging from £50m to £400m, including the firm’s first IPO. Prior to this, she worked as an analyst at DC Advisory, predominantly focusing on buy-side transactions.

In her previous roles, Courtney has worked alongside both entrepreneurs/management teams and private equity houses. She also has experience across a broad range of sectors, including industrial, consumer and business services.

At BGF, Courtney will be responsible for supporting the team with transactions, and will be involved in all aspects of the investment process, from origination through to execution and completion. 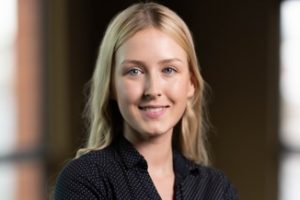 Neil Inskip, head of BGF in the North West and the Midlands, said: “Attracting and retaining talent is a key aim for many businesses in the current climate and, at BGF, we’re no different. We want to hire the brightest and best investors to help support our ambitions not only as an investor, but also those of our current and future portfolio.

“Courtney has quickly established herself in the North West investment community and we’re delighted to have her on board, as we continue to invest significantly in fast growth, entrepreneurial businesses across the region.”

Courtney said: “One of the things I loved about being on the sell-side was working with skilled entrepreneurs and management teams. At BGF, I’m really looking forward to continuing these relationships into the investment period and beyond, as I work alongside business owners and management teams to support them in achieving their strategic growth ambitions.”

To date, BGF has invested £454m in the North West, with £46m so far in 2022, with recent deals including a £15m investment in international freight logistics and express courier specialist, ITD Global, together with the highly successful exits of Liverpool-based Sentric to Swiss music fintech company, Utopia Music, PTSG’s acquisition of NSS, and CurrentBody’s sale to eComplete.

McAleenan began his career by training with Brabners in 2003 and returns to the firm following 12 years with JMW as solicitor and partner in media law.

He has been ranked as a leading individual in his field by the directory Legal 500 and has also appeared in The Lawyer magazine’s ‘Hot 100’.

He joins the team having advised on a number of ground-breaking cases throughout his career, including the first data breach class action in English legal history – acting for claimants against Morrisons supermarkets in the Supreme Court. 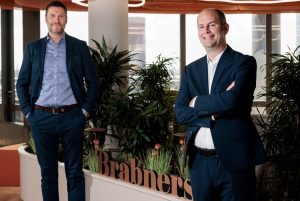 Alongside data protection, McAleenan brings extensive experience to Brabners in advising businesses and individuals on issues including reputation management, crisis communications, privacy, harassment, and social media disputes. He has acted for influencers and celebrities, alongside corporates and large organisations.

McAleenan joins Brabners’ 45-strong litigation team, and will be based at the firm’s new 20,000 sq ft office at 100 Barbirolli Square, Manchester. Most recently, the firm’s litigation team successfully led the defence of Coleen Rooney in the landmark ‘Wagatha Christie’ libel case.

Nik White, managing partner at Brabners, said: “Nick’s expertise will complement and build on the existing skills within our litigation team, which continues to advise on some of the UK’s most high profile disputes involving both businesses and individuals.

“His skills in data law will help us to further develop that niche specialism within the team. And his experience will help us to bring further success for clients in privacy and defamation disputes, which have recently included spearheading England Cricket captain Ben Stokes’s privacy claim against The Sun.

“He becomes the sixth partner to re-join us in recent years, which reflects our fast-growing position as one of the best firms to work for in the UK.”

Nick McAleenan said: “Brabners’ litigation team is obviously going from strength to strength following a series of prestigious instructions and notable successes. The culture and ethos of the firm is well known and a big draw for me. I’m looking forward to helping to strengthen the team’s expertise and build out our offering in relation to cutting-edge media and data work.”