A West Midlands couple who turned their passion for ultra-premium vodka into their own spirits business have paid tribute to the power of staying positive after they overcame the challenges of launching their venture just a month before the lockdown.

Baz and Sunny Kooner say that their vodka label Jatt Life has gone from just surviving to thriving despite last year’s lockdown sabotaging their plans to sell Jatt Life through bars and restaurants, all of which were forced to close. 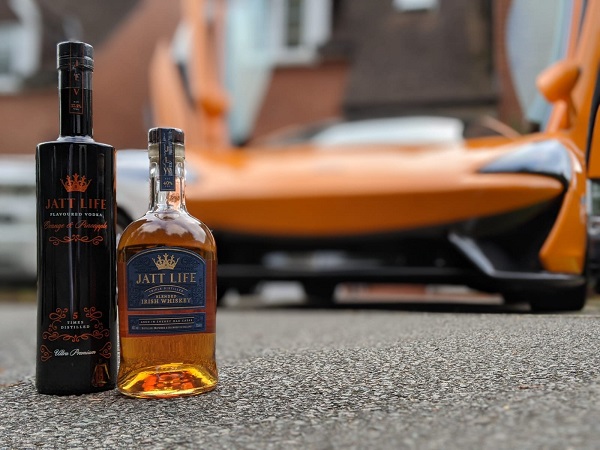 Instead, they turned their attention to selling their products – which comprise of their five-time distilled French grain 37.5% ABV vodka as well as a whiskey and a gin called Jatti Gin – online and direct to wholesalers.

Just over a year later, their persistence has paid off, with two more dual-flavoured vodkas now on sale, another soon to be released and an export business that is now being ramped up three-fold after its first overseas shipments of vodka to Australia, Canada and New Zealand sold out in a matter of days.

Baz and Sunny, from Wolverhampton, already run a string of successful dessert parlours, Delightful Desserts, all over the UK and in the Netherlands but fulfilled a long-held ambition to sell their own ultra-premium vodka when they launched Jatt Life last year.

Accompanied by a social media marketing campaign involving a host of influencers from TV shows including The Only Way Is Essex and Ibiza Weekender, the couple set out plans to sell Jatt Life through bars, restaurants and other hospitality venues.

Instead, all the target venues were closed as part of the nationwide lockdown designed to reduce the spread of the coronavirus, forcing the couple to find alternative routes to market.

This switch enabled them to achieve enough sales to support the launch of their first dual-flavoured vodka, an orange and pineapple variety, last autumn, and follow it up by launching a forest fruits flavour earlier this year, alongside Jatti Gin, a raspberry and peach flavoured gin.

After a difficult start, Baz and Sunny sold 100,000 bottles of spirits in their first year and plan to launch their next products, a lime-flavoured vodka and a zero-alcohol product, next month.

Baz said: “I have always had a passion for good quality spirits, with my wealth of knowledge in this space, I knew the right step forward was to create something new for people that enjoy the finer things in life.

“We’re an example of a business that started at the beginning of the global pandemic in a very troubling and scary time for the world, but which has managed to grow and not just survive but thrive.

“It’s wonderful to now our vodka is so popular overseas, it’s a wonderful reward for working hard and keeping our positive mindset.”

Baz and Sunny are currently sitting 24 months ahead of their business plan and have finally started selling its bottles to newly re-opened bars and restaurants – a full 15 months after its original launch.

They also plan to add Dubai, Morocco and a host of European countries to their overseas stockist list this year.

Sunny added: “We have worked extremely hard to ensure the quality, the branding and the marketing of Jatt Life is exactly right.

“The positive sales are a result of all the hard work we are doing behind the scenes. We are really happy with progress so far – the only way is up!”

Last chance to book for this morning’s export webinar

Talk your way to export success at our forthcoming webinar