Developer MEPC is advancing the second phase of the £700m Paradise Birmingham scheme with detailed plans for two more buildings due to be submitted to the city council later this summer.

The details include plans for two new buildings – a hotel at the south western corner of the development, overlooking Paradise Street and Suffolk Street Queensway, and an office building, Three Chamberlain Square, fronting Paradise Street – plus new public realm around the buildings, including Ratcliff Square and Western Terrace.

The 17 storey hotel, which has been designed through a collaboration between hotel specialists ISA Architecture & Design and Paradise masterplanners Glenn Howells Architects, will feature 152 bedrooms, a ground floor food and beverage offering, plus a sky bar with panoramic views across the city.

The new public realm is being designed by Grant Associates landscape architects who designed the public realm in Phase One, including Chamberlain Square. 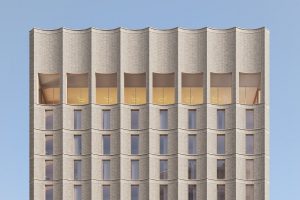 The new public realm in Phase Two includes Ratcliff Passage, between the Town Hall and Three Chamberlain Square, which will become the new home of statues of James Watt and Joseph Priestley and provide a new tree-lined route to the Town Hall tram stop.

Ratcliff Square lies between Three Chamberlain Square and the hotel, and Western Terrace will lead down to the refurbished Easy Row walkway and through to Arena Central and Broad Street.
The public consultation will take place online from now until 30 July.

In April of this year Birmingham City Council also awarded planning permission for the 49-storey, 155 metre tall Octagon residential building at the northern edge of Paradise that will bring 370 homes to the city centre.

Rob Groves, regional development director with Paradise development manager MEPC, said: “Our plans for completing Phase Two of Paradise will create jobs, opportunities and promote skills for the people of Birmingham as well as helping Paradise realise its potential as a game changer for the city.

“Our ambition at Paradise has always been to create a truly mixed use development and in our proposals for completing the second phase we are bringing together plans for hotel and leisure use, exemplary commercial space and a large amount of new public spaces. Moving ahead with a number of new buildings right now is a massive vote of confidence in Birmingham and the regional economy’s recovery from the Covid pandemic. 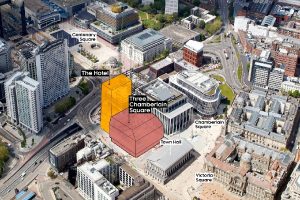 “We have had an incredibly positive response to our first two buildings and the transformation of Chamberlain Square.  We want to continue to build on this and give people who will live and work at Paradise and visit the estate, an even more enjoyable experience by opening up those connections across and through the city centre that we have always talked about in relation to the Paradise masterplan.

“Our consultation exercise is another opportunity to listen and learn from the public and show as many people as we can our plans.”

The private sector funding is being managed by Federated Hermes International.

MEPC is the development manager.

Paradise sits in the country’s largest city centre Enterprise Zone and has already benefited from investment by the Greater Birmingham and Solihull Local Enterprise Partnership (GBSLEP) in enabling and infrastructure works.

Investors snap up drive thru complex

Property group gets to work on HQ expansion