The government teams had previously been spread across eight different buildings, but consolidating them under one roof is expected to save the taxpayer around £2m per year. 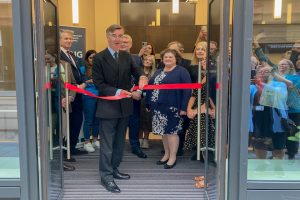 The refurbished offices at 23 Stephenson Street can accommodate up to 1700 civil servants and is part of the Government Property Agency’s strategy to consolidate the number of public buildings and concentrate them in town and city centres.

Roles are being relocated to the West Midlands out of London via the Places for Growth programme, which will move 22,000 roles out of the capital by 2030.

The government has committed to relocating more than 2,100 roles to Birmingham, Coventry, Stoke-on-Trent and Wolverhampton by 2025.

Minister for Brexit Opportunities and Government Efficiency Jacob Rees-Mogg said: “The new Government Property Agency hub which I have opened in Birmingham today is a clear demonstration of Her Majesty’s Government’s commitment to the West Midlands.

“This is good news for businesses in Birmingham, who will benefit from the increased footfall in the city centre, as well as for people from the area who will now have more opportunities to build a successful career in government.

“This hub is an important part of our plans to create a leaner and more efficient public estate, which will save taxpayers’ money and serve the entire United Kingdom.”

Six thousand roles have already been moved out of the South East and across the UK under the relocation programme.

So far 880 roles have moved to the West Midlands, with many based in the new hub. More than 400 roles in central government teams are now based in Birmingham, including teams in the Department for Transport, Cabinet Office and other departments.

Wolverhampton has also benefited from the relocation of around 200 roles at the Department for Levelling Up, Housing & Communities.

GPA Director of Capital Projects Clive Anderson said: “The Birmingham Hub represents another significant achievement for the GPA’s Government Hubs Programme and our ambition to deliver great places to work across the UK.

“The formerly disused retail space is now refurbished into a modern, digitally-connected and inclusive workspace for civil servants across government with greater energy efficiency and smarter ways of working.”