Award-winning chef Larkin Cen is bringing his Bristol-based Asian restaurant, Woky Ko, to Birmingham this October with a host of brand-new dishes.

Available exclusively on Deliveroo, residents in the city will be able to order signature dishes such as Korean Fried Chicken Katsu Curry – recently listed as one of Bristol’s top five items ordered on Deliveroo – along with a series of Bao,.

To celebrate the launch of Woky Ko in Birmingham, the first 100 orders of £15 or more from the new restaurant will receive two free Woky bao with their orders when they add the free item to their Deliveroo basket.

The Birmingham edition will be the only Woky Ko outside of Bristol, with the delivery-only offering opening in the Jewellery Quarter in mid-September. 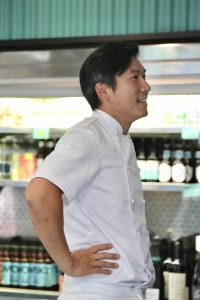 Chef Larkin, who featured on this year’s Great British Menu, left his career in law behind to pursue his love of food; rooted in his childhood from growing up and working in his parent’s Chinese takeaway.

Larkin Cen said: “We’ve been working towards expanding for a while now and Birmingham was a firm choice for us.

“The city has such a vibrant food scene with so many incredible concepts – it’s definitely somewhere we can’t wait to be a part of. Bristol has been amazing and everyone’s been incredibly supportive of our journey so far, and now we feel we’re more than ready to bring our food to Birmingham.”

Woky Ko opened in Bristol’s Wapping Wharf in 2016, bringing bold and exciting flavour combinations to a growing culinary scene and has since expanded into four restaurants around the city.

Opening date of restaurant and sky bar at Birmingham’s newest...

Aldi stakes its place as UK’s fourth largest supermarket as...