Doncaster Sheffield Airport (DSA) says travel and tourism company TUI will further expand by adding an extra aircraft to its base at the airport, starting flying in summer 2020.

Two new routes – Fuerteventura and Heraklion – will be added on top of the recently announced services to Mexico and Girona, along with additional days of operation to ten destinations. These include Ibiza, Larnaca, Reus, Malaga, Lanzarote, Turkey, Mallorca, Tenerife and Zante, bringing the total number of destinations offered by TUI to 31 destinations from this airport.

The new aircraft is expected to deliver an additional 136,000 extra seats to DSA, taking TUI to four aircraft based at the airport.

It is the second major commitment made by TUI to expand at DSA in as many years, with long haul routes to Florida and Cancun and a new route to Girona, Spain added last year, offering in the region of 700,000 seats from the airport.

Over 1.4m passengers are expected to travel through DSA this financial year, representing its busiest year since opening in 2005 and more than doubling in size since 2013/14. The news comes further to the airport being named Best UK Airport by Which? Magazine for the third year in a row. 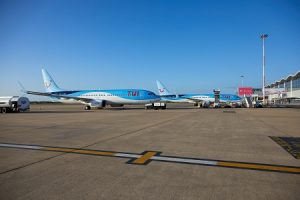 Robert Hough, chairman of Doncaster Sheffield Airport, said: “Our relationship with TUI is one of true partnership, established in 2005 when the DSA first opened. Over a decade has now passed and next year we will celebrate 15 successful years together during which time TUI, one of the world’s leading travel companies, has carried over 7m passengers through DSA.

“The recent loss of Thomas Cook to the industry has many sad consequences including the withdrawal of over 3.5m seats from the North of England, the majority from Manchester Airport. TUI has shown its continued confidence in DSA by choosing to help serve that demand by adding two new routes and ten extra frequencies here in Yorkshire, with a further aircraft growing its established and successful base. Further jobs will be created here as a result of this fourth aircraft.

“TUI added long-haul destinations to Sanford, Florida in May this year which have proved hugely popular, with Cancun, Mexico taking off next summer, making DSA the official home of Long Haul holidays in Yorkshire.

“This all illustrates huge confidence in DSA and our established reputation for an easy, friendly, relaxed and award-winning service for our customers.”

TUI UK and Ireland’s director of aviation planning, Karen Switzer, said: “Earlier this month TUI announced an additional two million seats to many holiday destination favourites and today the majority of these seats go on sale for summer 2020.

“We are delighted that our new additions launched today provide holidaymakers departing from our regional airports with even more choice when deciding where to go next summer on holiday.”

James Muir, chair of the Sheffield City Region Local Enterprise Partnership, said: “Doncaster Sheffield Airport is a key asset for the region and I am delighted to hear that TUI are growing their offer.

“The Local Enterprise Partnership is committed to realising the huge potential of the airport so that it plays a major role in driving growth, boosting our international appeal and supporting businesses to trade around the world.”

Caroline Flint MP, Don Valley, said: “This major commitment by TUI to Doncaster Sheffield Airport is very welcome and demonstrates the long-term confidence they have in the airport, having seen continued growth here over many years.

“This is an important investment in Doncaster, job creation and of course in our local airport, which is an asset capable of making a truly national impact to our economy.”

Ros Jones, Mayor of Doncaster, said: “This announcement by TUI and Doncaster Sheffield Airport is great news and further evidence of what we are putting in place to help drive Doncaster forwards and upwards is working.

“It shows the confidence TUI has in the Doncaster and wider Sheffield City Region economy, the direction Doncaster is heading and the growth Doncaster is seeing. Delivering Great Yorkshire Way is a prime example. The new link road has been the catalyst for substantial economic growth. Doncaster and Doncaster Sheffield Airport are taking off.”

Airline cancels flights to and from Doncaster Sheffield Airport

Jet2 suspends flights to Poland as demand slumps amidst Ukraine...

Welcome to Yorkshire going into administration after...