Modular home-building in the UK has received a major vote of confidence with a £30m investment in a Yorkshire pioneer of the manufacturing process by Homes England.

The cash boost is part of the government’s drive to help build more homes faster, while creating additional capacity in the construction industry.

And it is the first time the agency has ever directly invested to boost an offsite manufacturer’s production capacity.

The ilke Homes process creates 90 per cent less waste than traditional construction, with its Flaxby factory recruiting and re-skilling workers from outside the industry.

The funding will allow it to scale-up production and accelerate manufacturing capacity from two to eight homes a day, bringing manufacturing costs down in the process.

By next year, 2,000 modular homes will roll off ilke Homes’ production line at its 250,000 sq ft factory. This will rise to 5,000 homes a year within the next five years, making ilke Homes a Top 10 housebuilder in the UK.

The precision-engineered homes, manufactured with galvanised steel frames, are designed to beat traditional homes on energy efficiency and durability.

And by manufacturing offsite, the homes are delivered twice as fast as traditional methods of construction meaning income streams can be accessed faster by private developers, housing associations and local authorities.

ilke Homes works with private developers and major housing associations, like Places for People and Home Group, as both a joint venture partner and as a supplier of turnkey products that developers can use themselves.

“We want to continue driving efficiency, quality and sustainability within the housebuilding industry and see this as a fantastic signal to others wishing to do the same.”

Nick Walkley, chief executive at Homes England, adds: “Our role is to be bold and take steps to speed up the delivery of homes across the country and there is huge, untapped potential to unleash by creating more capacity in offsite manufacturing.

“Modern methods of construction offer enormous benefits to housebuilding and this deal will have a transformational effect on ilke Homes’ production.”

Mark Farmer, a government advisor who warned in his landmark report that the construction sector must “modernise or die”, said the funding highlighted Homes England’s ”increasing appetite” to make direct interventions to address some of the challenges homebuilding faces.

He adds: “The unequivocal support from government should further incentivise investment into modern methods of construction.”

Earlier this year ilke Homes agreed the UK’s largest ever modular housing deal with Places for People for 750 properties.

The company has also launched its on-site academy dedicated to training a new generation of engineers to manufacture modular homes.

Giles Taylor, partner and head of property and construction for the North at KPMG, says: “The country needs 300,000 new houses a year, we have got to deliver on that, but it is going to take time to close that gap.

“We need to be smarter as an industry.  Modular housing is a really exciting and positive development for the industry. We’re seeing investment in this and it has the potential to make a real impact.”

Land availability is a challenge

Traditional housebuilders in Yorkshire say the market remains strong, with buyers across the region taking advantage of low interest rates, the government’s Help to Buy scheme and competitive mortgage products. 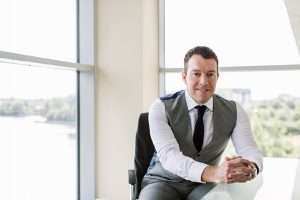 Ian Hoad, Keepmoat Homes Yorkshire and the North East divisional chairman, says the business has built more than 530 new homes in the region this year. However, he warns that land availability and acquisition is a challenge for every housebuilder.

Hoad says: “In Yorkshire at present the councils’ local plans are either adopted or well advanced, which means that the future supply of sites have been identified and will be brought forward by developers or councils over the duration of the local plan period of 15 years.

“It’s important to realise this process takes time and that some councils started consultation on potential housing sites a decade ago, with most of these sites which are under developer control having already been constructed or currently going through the planning process.

“This means that for developers like ourselves, we are now trying to predict which opportunities will be considered to be suitable in the new local plan review.”

Hoad adds: “We have adopted a proactive approach to sourcing new land opportunities and a review of site allocation plans throughout Yorkshire has identified that our ability to bring forward new opportunities is largely constrained by a lack of availability.

“The challenge we face is that the majority of sites are either controlled by competitors, not immediately available or the landowners are not willing to sell as land values do not meet their expectations – a challenge which developers across the country are facing.”

Local authorities control “a significant number” of potential housing sites, Hoad adds. “We have strong relationships with many of the region’s councils and are working with them to deliver new homes.

“However, even with sites under local authority control the market still experiences limited supply, which in turn means that when opportunities are brought to the market by landowners, agents or promoters, land values are being driven up as demand is high.”

Adrian Rooney, housing and development director of Bardsley Construction, which has a major operation in Yorkshire, says the industry faces major obstacles in meeting the government goal of building 300,000 homes a year.

He says the biggest issues are “the availability of sufficient land, labour and materials” – and “unblocking the planning system to ‘fast track’ opportunities”.

Rooney says: “We are seeing some sizeable land opportunities coming through, but generally, these have many challenges and are difficult to develop sites, with some needing extensive remediation – all of which will take time and are costly to develop.

“We also have to question whether some of the sites are in the right locations where housing demand is greatest, with the necessary infrastructure and support networks in place or whether markets are being created.

“On the positive side we have seen a significant increase in the provision of housing for older persons, generally in the forms of extra care and extra care ‘lite’. We have six such schemes in development, with more in the pipeline.”