Popular waterfront venue to be redeveloped

Oracle Bar and Nightclub will close its doors for the last time on 1 February as its lease expires, bringing to an end 15 years of business at Brewery Wharf, Leeds.

Rushbond, the original developer of the Brewery Wharf estate – and many others in Leeds including Channel 4’s new home, The Majestic – will be taking the opportunity to develop the building into a mixed-use space. 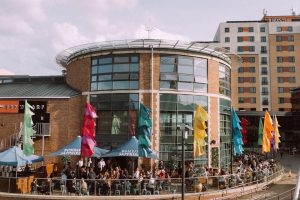 The first-floor boutique nightclub will be turned into a creative office space, while the bar and waterfront terrace will be developed into a new concept.

Oracle first launched in 2005, as a trailblazer in the city with its two-floor layout and received acclaim from the industry winning ‘UK Bar of the Year’ at the National Bar, Entertainment and Dance Awards in its founding years.

The ground floor bar and restaurant soon became a popular spot for after-work alfresco drinks and dining on the largest waterfront terrace in the city. The venue was also recognised for its forward thinking trends, being the first Leeds eatery to launch a gourmet burger menu, before introducing street food operators on rotation.

Above was one of the first boutique nightclubs in the UK, pioneering VIP hospitality and bottle to table service. It became a regular haunt for celebrities and footballers.

With planning permission already approved, redevelopment of the site will start in the spring with new tenants expected to be in place for the summer.

Deborah De Vittoris, co-founder of Oracle, said:  “Oracle maybe closing its doors, but it leaves behind a legacy as a leading innovator of the leisure market in Leeds; a flagship venue that continually adapted over its 15 years of trading to the latest consumer trends.

“I’m extremely proud of everything Oracle went onto achieve, the fantastic management and staff that worked at the venue and the many customers that enjoyed everything the venue offered. It’s great to see the landlord now breathing a new lease of life into the Brewery Wharf development, as it continues to adapt and evolve for the future.”

Richard Baker, senior development surveyor at landowner Rushbond, said: ‘’Brewery Wharf spearheaded the renaissance of Leeds’ Waterfront and Oracle has been a popular flagship venue in the heart of the development for the past 15 years.

“We look forward to taking this opportunity to invest, develop and diversify the space ready to welcome new tenants to the area.’’

Luxury retailer celebrates a quarter of a century in Knightsbridge of...