The site which was purchased freehold in March 2019 has been home to the club since 1895, is set for a significant upgrade including a 4G playing service and new 2,500 seater East Stand if plans are approved. 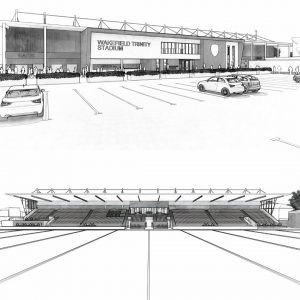 In addition the club’s plans include upgrades to the floodlights, renovation of the existing North Stand terracing and a new dedicated fan zone.

John Minards, chairman of Wakefield Trinity said: “The new stand will provide first-class 21st century facilities for our spectators, which are well overdue.

“This phase of our redevelopment plans will provide multi-functional community facilities including conferencing and banqueting space and a café.

“The 4G pitch will also be available for community use as well as providing an all year-round venue for our first and youth teams.”

This update and expansion of the club’s existing 1924 structure follows on from the plans which were approved ion 2012 but failed to secure funding for a new 12,000 capacity stadium development on the former Newmarket Silkstone Colliery, which would have also included a 120-bedroom hotel.