Home / Yorkshire / Lifestyle / 7 places to enjoy from the 12th

7 places to enjoy from the 12th

With the confirmation at the start of this week that on the 12th April the region’s hospitality industry will be reopening, we’ve pulled together some of the places we’re most excited to visit next week and in the month ahead.

Starr Inn the City
What could be better than sipping an ice cold beverage while enjoying food that the Michelin guide described as “modern yet gutsy”, on a terrace overlooking the River Ouse? Well if that sounds like your idea of heaven be sure to visit Starr Inn the City in York. The brasserie-style restaurant which opened in 2013 it’s currently accepting table reservations for diners, however if you just want to enjoy a drink, you’ll have to pop in on the day and you’ll get a seat as soon as possible. 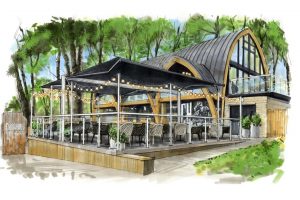 Oakwood’s premier dining sport Chophaus has unveiled a new heated terrace as it launches what it describes as its “most ambitious menus to date”. Teaming up with celebrated chef Lee Murdoch, the menus have been designed to pique the interest of even the most discerning fo foodies, with dishes including lighter bar plates like Truffle Puffs with black garlic sauce and larger plates split across four sections including Raw and Sushi and the Signature and Charcoal. The new terrace created by the award winning Nanu Soda can seat 80 guests comfortably and is flanked by lush green trees.

Merrion St
If the last 12 months has shown us anything it’s the power of working together. In that spirit the bars of Merrion St have joined forces to create the city’s largest outdoor drinking area by covering the street with a 50m canopy and offering a 200-person capacity. The venues involved in the five week include Mojo, Verve, Yard and Coop, Mean Eyed Cat Bar, Roxy Ball Room, Manahatta, Liv Bar and Zaap Thai Street Food, with bookings available directly via their websites.

Northern Monk Refectory LDS
Named the fastest growing businesses in Yorkshire recently, Northern Monk is preparing to reopen its Holbeck Refectory opposite the Round Foundry Media Centre.  Re-launching on Thursday 15th April the venue will host Chow Chow, a joint project between Doner Summer and Little Bao Boy serving vegan BBQ food. Table reservations are currently available and you’ll be able to order vis either table service or the brewery’s own Fresh From the North app.

Victoria Quays is a large canal basin close to Sheffield City Centre and offers the perfect place to start a walk, run or cycle along the Sheffield and Tinsley Canal, take in the street art trail. However if you’re after some food and drink visit True Loves and enjoy in its outdoor terrace and new range of Posh Pizzas, or visit  Dorothy Pax to enjoy some canal-side drinks. The latter is asking for a £5 deposit on reservations to avoid no-shows and is making a donation for every table booking to the charities it supports.

The Piece Hall
Nestled in the heart of Halifax The Piece Hall has something to offer whether you’re off out for food, a drink or just a walk. The 18th century building boasts an amazing courtyard providing a place to sit and enjoy some of the treats from its independent stores including Gin Lane, The Deli and Elder. With more seating set to be provided what better place to sample some of the town’s best offerings.

The Devonshire Arms
If you’re looking for something different, The Devonshire Arms at Bolton Abbey will be opening its Laurent-Perrier Champagne & Seafood Terrace from 12th. Guests will be able to dine under canvas on the lawn of the hotel while enjoying views of the River Wharfe and Beamsley Beacon. The venue will combine socially distanced dining including freshly caught seafood including shellfish caught off the East Yorkshire Coast, as well as Lindisfarne oysters, all perfectly washed down with your drink of choice whether it be Laurent Perrier Champagne, an Aperol Spritz or New Zealand Sauvignon Blanc. 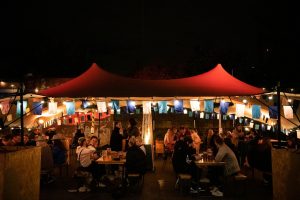 An honourable mention goes to Chow Down, the outdoor drink and dining space at the Temple Arches in Leeds which is back for summer from 12th April. Sadly this one is currently fully booked but if you have already secured your spot you’ll be sure of a good time with music provided by a host of talent and food from places including Meat Stack, Tikka Chance on me and Scoop.

However, if you haven’t got table booked for the reopening, there is still availability throughout May and June, with a revolving door of food vendors and musical talent to enjoy.

Food festival to return this month after missing out in 2020

An ode to the pint to celebrate pubs reopening

City’s oldest pub to return after its longest ever closure