Bradford Council, working with West Yorkshire Combined Authority, has launched a public consultation on a flagship programme of transport and place-making schemes to drive forward the district’s regeneration.

The four proposed schemes are intended to create a more attractive and pleasant civic centre for the district.

They also aim to substantially improve transport infrastructure across Bradford, so people can get around more easily via sustainable forms of travel, including walking, cycling and public transport.

The plans follow a successful bid submitted by the West Yorkshire Combined Authority and Bradford Council to the Department of Transport’s Transforming Cities Fund (TCF). 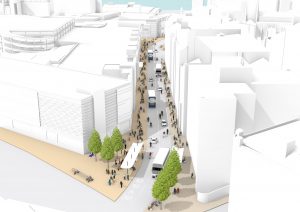 The Leeds City Region TCF programme, which is being delivered by the Combined Authority in partnership with local authorities, will be funded through £317m from the Department for Transport (DfT) plus local match funding up to £140m.

Through TCF and complementing existing programmes, Bradford Council has been indicatively allocated around £80m to deliver transport infrastructure and regeneration schemes to transform the city.

In a bid to reshape Bradford as a cleaner, more sustainable and future-ready district, the schemes will deliver a series of transport infrastructure improvements – making walking and cycling safer and more convenient, and public transport more reliable.

Enhancements will include new largely segregated cycleways connecting people to key areas of employment, major improvements to public spaces in the city centre with new greenery, and changes to public transport infrastructure across the district.

The plans would also produce a more vibrant and cleaner city centre through the removal of through traffic from key civic areas helping improve air quality, and making walking and cycling more accessible between shopping and leisure areas.

The public consultation on the proposed schemes is now underway and the feedback received will be used to help to shape the proposals.

Councillor Susan Hinchcliffe, leader of Bradford Council and chair of the West Yorkshire Combined Authority, said:
“Bradford’s Transforming Cities Fund programme will be essential to reducing car use and congestion across the city, improving the health of our residents and helping us to achieve our aim of becoming the UK’s leading clean growth district.

“Bradford is a district with a young and diverse demographic and a lot of potential. The schemes being brought forward will ensure we make the most of what Bradford has to offer, stimulating regeneration across the district and attracting further investment.”

Tracy Brabin, the Mayor of West Yorkshire, said: “In my manifesto, I committed to improving public transport and helping tackle the climate emergency on our way to becoming a net zero carbon economy by 2038.

“Transformational schemes such as these being proposed in Bradford, combined with our efforts to improve public transport across West Yorkshire, will provide more people with more opportunity to choose to travel sustainably, whilst improving the civic landscape for all to enjoy.”

People can participate in the consultation by visiting the West Yorkshire Combined Authority’s YourVoice platform: https://www.yourvoice.westyorks-ca.gov.uk/bradfordtcf.

The consultation runs from Wednesday 28 July to Wednesday 8 September.