Two of Leeds’s top pop up venues are expanding to meet demand. 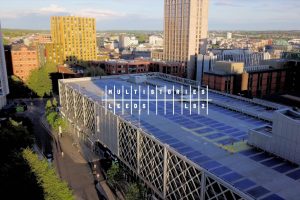 Multistories – the Leeds-based pop up that has transformed Level 8 at Citi Park in the Merrion Centre into a destination for fun this summer is growing with the addition of bottomless brunches from 7 August.

Every Saturday between 12pm and 2.30pm, visitors to the venue, will be able to get 90 minutes of bottomless brunch with food from one of the hottest chefs in the North, Matt Healy, while DJs will be set the scene with eclectic beats. Saturday’s will be followed by a Sunday bottomless brunch service which will be themed, with the first entitled “Diva Drag” and featuring local drag queen Velma Celli, with the theme changing each week along with menu.

Arron Fishwick, co-founder of Xperience Partners which runs Multistories states he wants it to really stand out in Leeds and said: “We’ve had some recent success with our Camden Helles tanker party and people watching the Euros on our big screen. It seemed like the logical next step to offer bottomless brunch, but to take it to another level (literally) by introducing the themes on a Sunday for those looking for something a little different. It’s been incredible to see people coming together and enjoying themselves at Multistories over the last month and a half and we are determined to keep things fresh and interesting by now offering the highest brunch in Leeds city centre. It’s exciting.” 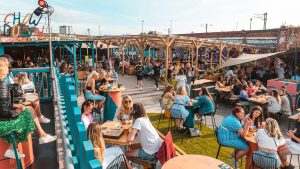 Across the city, the established food festival and pop up space Chow Down at Temple Arches which launched last summer when the pandemic put the kibosh on its original 12 planned events, touring everywhere from Manchester to Halifax to Lincoln is here for more than just summer.

Following the success of the city’s giant Covid-safe Leeds outdoor space for eating, drinking and entertainment, it will now settle at Temple Arches until the site is developed in line with CEG’s masterplans, and it is launching its own new cocktail bar, Tipples, to celebrate.

Commenting on the success of Chow Down and it becoming a permanent addition to the city’s visitor economy, councillor Jonathan Pryor, Leeds city council’s executive member for economy, culture and education said: “It’s been great to see so many people enjoying Chow Down over the past year and for the event to have given the city a much-needed lift through some difficult times. Innovative events like this exemplify how incredibly resilient and imaginative our local business community has been, and we’re pleased to see Chow Down continuing over what will hopefully be a memorable summer for the city.”

James Milson, property manager at CEG which owns the site that forms part of its Temple District, said: “Temple and CEG wish Chow Down a Happy First Birthday at Temple Arches. Having started out in unprecedented and challenging times, it’s been an exceptional transformation of the Temple Arches site, bringing new energy and life to the area. The Temple Team looks forward to partnering with Chow Down and the New Citizens team for years to come, as the development of Temple District continues!”

Matt Long, director of New Citizens and co-founder of Chow Down: “This area of Leeds has some amazing plans for the future and we can’t wait to be a part of that. It’s been incredible to see Chow Down grow over the last year, and cement itself as a permanent venue at Temple Arches. Alongside Chow Down, we (New Citizens) have great projects in the Temple area, with Oktoberfest and The Garden Party, so we feel very much a part of this exciting transformation.

“At Chow Down we have looked to support as many independent food traders as possible, and this year to date we have had over 50 vendors trade with us, helping out and actually kickstarting many of the hospitality scenes as we rotate the food as much as possible. Our drink supply is very much as local as possible, and is ever-rotating. We are planning some more collaboration brews on the menu for later in the year, after the huge success of our North Brew Co beer this summer.”

It’s about Stein…don’t miss your chance to be at...