Artisan cheese maker Shepherds Purse, based in North Yorkshire, has come under fire again for the name of its “Yorkshire Fettle” cheese.

This is 12 years after the cheese was renamed due to the name “Feta” being awarded a Protected Designation of Origin (PDO) by the European Commission.

The PDO for Feta was granted in 2002, with Greece being awarded exclusive rights to the name Feta.

The PDO was challenged by Denmark and Germany, ultimately unsuccessfully and in 2008 Shepherds Purse was forced to leave Feta in the past, re-naming its Mediterranean salad-style cheese Yorkshire Fettle, a well-known northern English word.

Yorkshire Fettle went on to win International Cheese Awards and has been stocked in Morrisons, Tesco, Sainsburys and Waitrose and served in restaurants across the UK.

But Fettle has now attracted the attention of the Association of Greek Producers, SEVGAP, which believes that the use of Fettle breaches the protection afforded to Feta and has therefore demanded Shepherds Purse cease using the name. 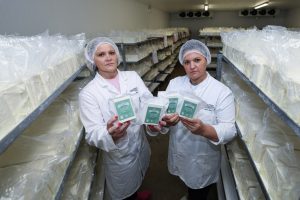 Shepherds Purse says it disagree with SEVGAP’s position but does not have the resources to take on the Greek dairy industry and will, once again, rename its product.

Yorkshire Fettle – called Yorkshire Feta at the time – was Bell’s very first cheese, produced in 1987 and launched as a product in 1989.

Shepherds Purse is now led by Bell’s two daughters, Katie Matten and Caroline Bell who employ a team of 35 on the family farm.

Commenting on the new PDO enforcement, Bell said: “It’s devastating to see our well-loved product go through this process once more after we believed it was resolved back in 2008.

“Whilst we agree whole heartedly with the spirit of PDO legislation, we don’t believe that our name breaches it.

“But we sit as a fringe case and sadly, as a small independent family business, our resources to fight it are limited, particularly after this exceptionally difficult period due to the pandemic.”

Katie Matten added: “After investing heavily in new equipment and new packaging during the pandemic to help support our sheep milk farmers, this has been a blow, especially given all the challenges of the pandemic.

“But we are keen to not let it set us back. It’s an exceptional product made from quality British sheep milk and we have over 30 years’ experience in making it. We will move forward positively despite this recent challenge.”

The business intends to relaunch its salad cheese with a new name before the end of 2021.