Monday saw Channel 4 officially move into its new Yorkshire HQ, The Majestic, a Grade II listed Leeds building that dates back to the 1920s.

However, when the building was announced as the broadcasters new headquarters in the nations and regions, few will have seen the similarity between the building and its most famous occupier.

The Majestic was once a cinema but since then it has evolved and its use changed. Now, as Channel 4 establishes itself behind its classical façade the broadcaster is having to do the same.

Commenting on the official move into the Majestic, Mahon said: “I’m thrilled to say that we’re at the heart of the city and we’re playing a growing role in the North of England’s creative clusters.

“I’m particularly proud that Leeds has been a main base for our coverage of the Tokyo Paralympic Games.”

Allan outlined how the business is accelerating and industry leading in its adoption of digital.

He noted that the aim is to double viewer numbers on its digital platform All4, as it looks to evolve from being a “linear broadcaster to a digital streamer” through its Future4 initiative.

However, this disruption – something Mahon noted is at the heart of Channel 4’s ethos alongside a little irreverence – is in fact being led from Leeds through its new 4Studio, which now employs 70 people in the city and recently took on its first cohort in the 4Skills programme designed to support young people entering the industry at grass roots.

Crucially though, the studio is not just delivering opportunities, but has also overtaken LadBible as the most viewed branded content partner in the UK. 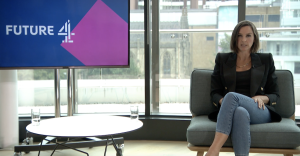 Alex Mahon, hosting a virtual launch at The Majestic in Leeds

Mahon was not only focused on the successes.

The chief executive, who oversaw the broadcaster’s Nations and Region programme which resulted in Leeds being selected ahead of Manchester and Birmingham as its out of London home, spoke out about the potential challenge facing the organisation.

The Government is considering whether the future is best served by Channel 4’s current operating model – where it is publicly owned, funded by advertising and is a publisher broadcaster rather than producer of content – or private ownership like Sky or ITV.

Mahon noted: “Channel 4 is a unique public service media company that has built the UK’s independent production sector and has created thousands of jobs across the country.

“It’s a singular British success story and it has never been in a stronger position culturally or financially than it is today.”

She cautioned that despite this: “It’s crucial this national asset is not just protected but is given the fullest opportunity to prosper for the next 40 years of its life.”

The language of protection may sound extreme for a business which has a heritage of both disrupting the media landscape and embracing the new.

But for Mahon it was clear that, having spent most of her career “running commercial businesses or worked for private equity backed companies” a change could have a seismic impact on audiences, the UK economy and the country’s world leading TV production sector.

On the day the broadcaster officially moved into The Majestic, Mahon noted that “new owners would likely want to reduce our office footprint.” 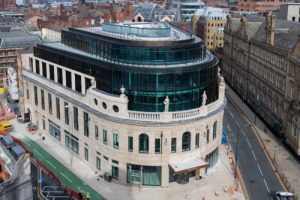 When asked later to elaborate she added: “I don’t know anyone else who runs a company of 1,000 people, that has five offices – it’s not what you would do for commercial optimisation.

“So under a purely profit driven model [the result of Channel 4 going into private ownership] it is unlikely that the spread would continue.”

She added the key to Channel 4’s diversity of location was that when exploring its Nations and Regions options, the business: “Didn’t just say this is the number of heads and we’ll move some back office people.

“We thought carefully about what roles to move that would involve changes to how decisions are made in the organisation.”

The impact of these moves she said has been to help build the UK’s creative clusters not just in Leeds where drama and sport are located, but also in Glasgow where its factual content is commissioned from.

Looking ahead, Mahon, who also announced an upcoming independent report from EY on the impact of changing Channel 4’s ownership, explained how she and her colleagues are focused on ensuring  the broadcaster “can be more of an impactful success for post-Brexit Britain into the 2030s.”

She closed the session stating: “Having considered all the available analysis, extremely carefully and modelled and stress tested this, we have not seen any evidence that the irreversible change of privatising Channel 4 will be in the interests of either the British audiences, or the UK economy.

“It could well have serious and long lasting consequences for our world leading television production sector and for the progress that has been made in our creative industries outside of London.”

Earlier this month, Tracy Brabin, the first West Yorkshire Mayor, who has pledged to champion a new deal for the region’s creative industries launched a campaign to highlight the impact privatising the broadcaster could have.