Colourful meadows and the installation of a sustainable urban drainage system will feature as part of an £800,000 project in Sheffield’s historic Castlegate.

An improved environment for walking and cycling will be created through the widening and re-surfacing of the existing footway and cycleway, the installation of traffic calming measures and improvements to street furniture.

Esh Construction’s civil engineering division has begun work on the scheme in Angel Street after being appointed by Sheffield City Council earlier this year.

Castlegate is the oldest part of the city of Sheffield, with Angel Street being a key link route into city centre.

Procured via YORhub, the development comes after additional funding was secured from the European Regional Development Fund and Sheffield City Council to extend the improvements made via the Grey to Green Phase 2 project. 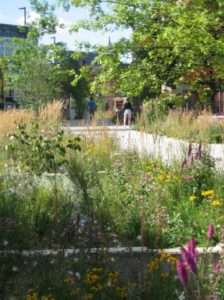 Steve Conn, divisional director at Esh Construction, said: “We are pleased to be appointed as the contractor to deliver this public realm and highways improvement scheme.

“A further phase to the successful ‘Grey to Green’ project, we look forward to delivering this project for the regeneration of Castlegate and to enhance the experience of visiting, living, and working in the area.”

“It is a much-loved scheme which brings a multi-layer of benefits to Sheffield, from economic development to these areas as well as increased used of the new spaces by residents and local workers and increased biodiversity and climate resilience.”