A healthy meal preparation business founded in Huddersfield has expanded to become a national service.

pREP UK started as a small counter on the town’s ring road but since recently undergone significant investment, with its sights set on becoming a nationally recognised brand.

It now ships more than 2,000 meal prep bundles per week, to customers who are strapped for time but still want to eat high-quality, healthy food.

pREP has doubled its footprint and invested five figures in a new IT and delivery system which will be scalable as the business grows. 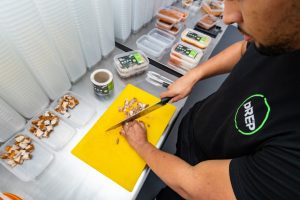 The business has also expanded its range of food boxes, from chicken and vegetables to bangers and mash, spaghetti Bolognese and jerk chicken, rice, and peas. All produce is sourced locally from Bolster Moor Farm, Sailbrand, and Wilsons Fruit and Veg.

Craven said: “Most people choosing the maintain option say how fantastically convenient it is as they don’t have to spend time making a list, going shopping, cooking it and tidying away.

“Others have commented that it has saved them money as they don’t end up spending so much on deals they don’t need from the supermarket.”

It is also in partnership with gym instructors around the UK and has a space selling meals at The Unit Fitness in Holmfirth.