The owners of the Crown Inn, a 16th century coaching inn at Roecliffe, near Boroughbridge, have appointed a new chef and a new general manager.

The Coastal and Country Inns Group has heralded the arrival of chef Paul Murphy and manager Paul Binnington as the start of a new era for the Crown.

Chris Hannon, managing director of Coastal and Country Inns, said: “These two appointments are crucially important for the future of the Crown. The two Pauls, who are both very experienced and very talented, are a true dream team. They work brilliantly together.”

Murphy’s experience includes building up the Timble Inn, near Otley, into five-star hotel from scratch and working with chef Frances Atkins at the Michelin-starred Yorke Arms near Pateley Bridge.

He said: “We are determined to give the village, and the surrounding district, an inn to be proud of. We have completely revamped the menu and are aiming for an AA rosette. We haven’t been here long, but the reaction so far has been brilliant. 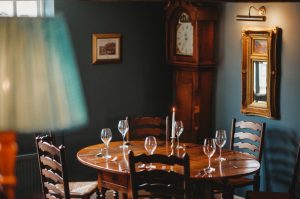 “I am aiming to replicate the success I had at the Timble Inn, which my wife and I ran from 2009 to 2014. Like the Timble, the Crown has immense potential.”

Binnington, who first teamed up with Murphy at the Station Inn in Birstwith, previously ran the Black Lion in Thirsk.

He added: “This is a fabulous opportunity for us both. Chris Hannon of Coastal and Country Inns has given us a blank canvas. He simply wants the Crown to be at the heart of the Roecliffe community and to be loved and treasured by villagers.

“Together, with help and support from our families, we can do this.”

During the pandemic, the Crown was comprehensively refurbished by Coastal and Country Inns. Hannon said: “This very special inn had enjoyed a golden period under the 11-year stewardship of Karl and Amanda Mainey and it is our mission to restore those wonderful times. The two Pauls will inspire the Crown’s renaissance.

“We are determined to make the Crown the beating heart of Roecliffe again, creating an award-winning inn where the residents can enjoy a quiet pint or two and the local community feels comfortable and at home.

“At the same time, we are looking to re-establish the Crown’s reputation for excellent food and drink in relaxed and informal surroundings, making it a destination location for food lovers across the county,” he explained. “We also have five en-suite double bedrooms for those who want to stay overnight or for short breaks.”

Night to remember as Yorkshire businesses celebrate in style at 2022...