Investment, it’s a word steeped in meaning for some it means growth and opportunity for others it means risk but how do tech entrepreneurs manage the two sides of that coin when raising funds for the future? 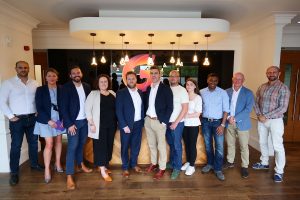 The was one of the points discussed at the recent roundtable as part of the TheBusinessDesk.com’s Talking Tech series which is sponsored by Armstrong Watson, Access2Funding, Gordons LLP and Sentio Partners.

Furqan Alamgir, CEO and founder of Connexin, a Hull-based business in the smart cities space started by stating: “The landscape has changed and there is a lot of money available for entrepreneurs at the moment focused on specific areas and if you can do the dance and play the game you can raise quite a bit of money.”

It was his point of knowing the dance and the game however which was key as Michael Kirk, co-founder of Another Space VR noted he often saw a challenge in understanding what “investors want” from companies during the fundraising journey. He explained that each investment opportunity is obviously unique and requires a bespoke response but he said “as a start-up it’s difficult to put that time and effort in” for each pitch because there are other requirements whether it’s product development or sales.

Alamgir responded with a simple piece of advice to entrepreneurs, “Investors are looking for people who are ambitious, so are you willing to solve an ambitious problem? Sometimes it’s best to take a step back and ask yourself honestly how far can your tech scale and then categorise yourself to the right investors.”

Adam Driver, founder of Modellr picked up on Alamgir’s point and said it’s not just about picking the right investor for your work it’s about picking what you say to the investor.

“Sometimes rather than saying I’m going to take over the world and be the next PayPal, it’s best to pick your verticals and say I’m going to focus on x or y, even if you know you can do the rest of it, because that will get the interest and make the valuation sensible.”

This led to the comment of risk, and the importance of understanding the idea of risk from the investors point of view.

Paul Hallett, co-founder of Vet AI said: “I think the word risk is a very interesting. If you talk about how you want to try and raise money and you see it through the VCs or the funders lens and they’ll assess risk, so you need to know what story you’re going to tell them and how you can reduce that risk.

“They’ll look at markets, revenue, teams; you need to know how you’re going to de-risk it for them even before you have the first conversation.”

He added that pre-seed investment is a particularly challenging area.

“So if you’ve not got the revenues, are you de-risking it by having the team, clients, prototypes etc.”

Mark Walsh, founder of Kwizzbit picked up the conversation and said he calls it “investor market fit” and says sometimes it’s also about picking the right investor for you.

“We spent over nine months with a VC last year, we got on really well and in the end, they offered us investment and we turned it down and went with angel investment. It was basically they weren’t the right people for us, we had a view of the way we wanted the business to go, and they had some great suggestions for what they could do but it came down to a cultural thing and it was a very hard thing to do but I’m very glad we did it as they just weren’t the right people for us and didn’t have the same values as us.”

Amy Pierechod, partner at Gordons LLP picked this up and said “It’s a marriage at the end of the day, you’re not just taking their money, they’re going to sit on your board and they’re going to have a significant amount of control. So, you need to know you are going in the right direction because they can ultimately force and block decisions.”

One thing that was unanimous amongst all of the entrepreneur and founders in the room was that it is incredibly tough to raise funds and in the words of Walsh “it’s full time job”, and one that requires a lot of resilience as Driver said “its emotional, you get a lot of nos for a single yes”, which can lead to self-doubt.

Amir Hussain, founder of Yeme Tech said the challenge is knowing where to get the advice and where to turn to.

He said he’s fortunate to have benefitted from advice from other people but wondered if there was a gap in the ecosystem for advice.

Hallett added: “That dance piece [referring to how seeking investment is like doing a dance], is an interesting point, if you don’t know how to do the dance please speak to the advisors in the region!”

He explained part of the reason that Vet AI has been successful through its fundraise has been because the business engaged with and linked up with “some people who are seasoned dancers”.

“Don’t try to imagine what that dance is as you won’t raise, it’s not an easy thing. Go and take advice from people who have done it for years and they will help prepare you as best as possible for that moment.”

Will Arnold, partner at Sentio partners echoed Hallett’s oppinion and said: “It might be obvious but alk to as many people, get as many points of view as possible, when trying to decide whether you need investment, what sort and who from. Leeds has lots of entrepreneurs, funders and advisors who have been through the process so make sure you tap into that resource.”

As the conversation on investment drew to a close, Hallett added he believes there is a turning of the tide at present with funders changing their focus as a result of the current economic cycle.

Arnold said: “Led out of the US tech company valuations are taking an absolute hammering.”

However, he added that ultimately if you look long term investors still didn’t do badly, but that short term it doesn’t look as good but he said “it’s temporary, people won’t learn from this bubble and there’ll be another bubble in the future”.

Chris Archer, partner at Armstrong Watson added: “There’s a definite shake out in the market at the moment but investors will always want to support growth, so after the shakeout it will start moving again!”

Finding the right time to guard your ideas