A new vision for the long-term future of the East Midlands economy has been revealed today with new images which show how landmark sites could together deliver tens of thousands of new jobs and drive a “futuristic recovery” from the pandemic.

They show how three massive zones – covering areas around East Midlands Airport, Toton Hub, and Ratcliffe-on-Soar Power Station – might be transformed by major development which would boost growth to levels which drive large-scale job creation and unlock a new era of green growth for the regional economy.

The new images have been released as the region takes another step towards setting up the organisation which will help drive the vision’s progress – and just two weeks after Chancellor Rishi Sunak backed the region’s bid to host an inland freeport. 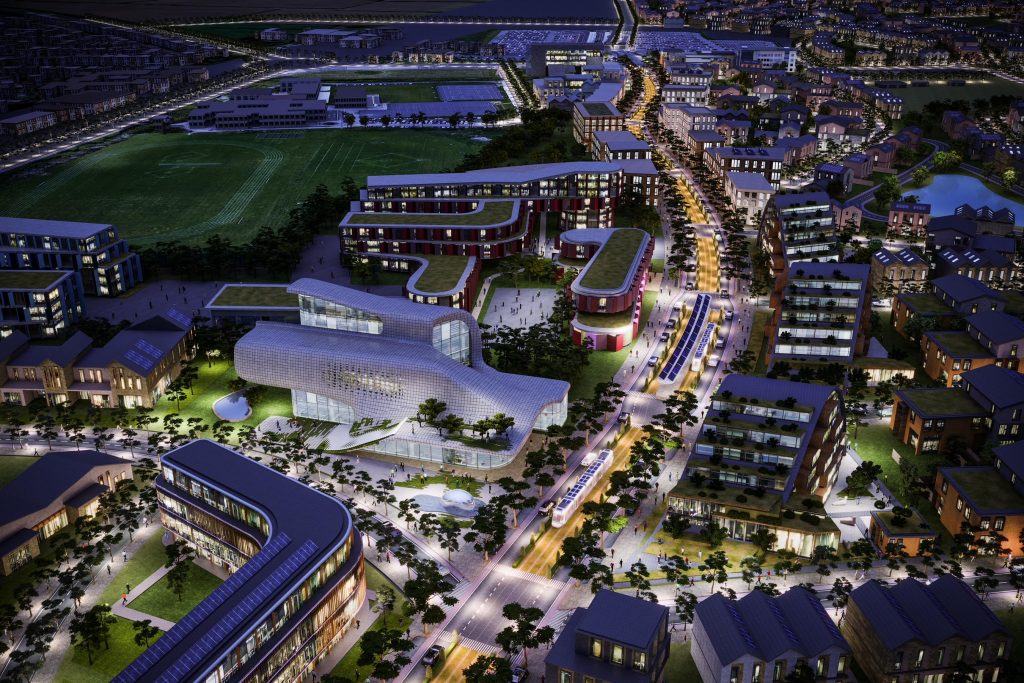 Vision of the future: An artist’s impression of how the area around Toton could potentially be developed

The five councils covered by the three zones have come together to fund an interim body which will begin the work of the planned East Midlands Development Corporation before parliament formally approves what will be a pioneering new model for upping the pace of regional growth.

The interim body will help masterplan and enable development, working with businesses, investors and universities to help get projects off the ground.

It has just submitted a Business Case to government which outlines what investment in the sites could deliver for the region: 84,000 jobs, more than £4.8bn in added value, and thousands of new homes.

The Business Case will be considered by government, which revealed in the Budget that the East Midlands had been chosen as the site of one of eight new Freeports in England.

The Development Corporation is one of the key projects of the Midlands Engine, the partnership of private and public sector sector organisations which works to promote investment and growth across the region.

Midlands Engine chairman Sir John Peace – one of the region’s most senior business figures – has chaired the group which led development of the new body.

He said: “What we have in front of us is one of the biggest opportunities the UK has ever seen to not just build on the potential of some major economic assets, but to transform the economy of an entire region in the process.

“The sites themselves are collectively the size of three London Olympic Parks and the vision for their growth is both ambitious and futuristic, embracing our net zero future and unlocking new opportunities which range from international trade to community-level growth.

“We must begin the work to unlock that potential now, and we start next month with the launch of the interim body.”

The five councils initially backing the interim vehicle are Leicestershire and Nottinghamshire County Councils, together with Rushcliffe and Broxtowe Borough Councils, and North West Leicestershire District Council. Talks on how the model can be extended further into the East Midlands are continuing.

While the new Development Corporation requires Westminster approval, it will be locally-led and also supported by cash from local Business Rates – giving the region’s businesses a stake in its progress.

The Business Case submission to government throws a spotlight on the key role prominent regional economic assets like East Midlands Airport will play in driving economic growth. It is home to the UK’s largest dedicated air freight handling operation.

By attracting ambitious, private-sector investment, the three sites will have the capacity to shift the dial of productivity for the regional economy. They are:

• East Midlands Airport area: which supports the region’s status as a centre for advanced manufacturing & research, and is a national and international logistics gateway which will be at the heart of the new Freeport zone
• Ratcliffe-on-Soar Power Station site: transforming part of the site of the UK’s last coal-fired power stations into a national centre for carbon zero technologies and manufacturing innovations, which is also in the Freeport zone
• Toton & Chetwynd: creating a new, connected community which will centre on a Garden of Innovation and the proposed HS2 Hub Station.

Clare James, East Midlands Airport’s managing director, said: “I welcome the opportunity to work in partnership with businesses and public sector bodies to help shape a future vision for this region and deliver economic growth and prosperity for people who live, work and study in this region.

“When the region does well, so too does the airport and vice versa. It’s therefore in all of our interests that the East Midlands prospers, and the airport, which is our doorway to the world, will continue to play a key role in this.”

Elizabeth Fagan CBE, chair of the D2N2 Local Enterprise Partnership, said: “The Freeport has been a fantastic win for the region and we are now working with partners to deliver it at pace.

“The proposed East Midlands Development Corporation will provide significant investments to accelerate and sustain our region’s economic recovery and growth.”

The East Midlands Chamber of Commerce represents 4,300 businesses across the region.

Its chief executive, Scott Knowles, said: “The East Midlands economy now has in front of it a series of major opportunities which must play a decisive role in both the recovery of the region in the wake of the pandemic and in unlocking the commercial opportunities presented by our digital and carbon zero future.

“Government’s decision to award a freeport to the East Midlands is a huge vote of confidence in our prospects. The Development Corporation and the partnership behind it give us an additional opportunity to drive joined-up progress faster than ever before and to turn the region into the UK’s investment destination of choice.

“It’s vital that the whole region now gets behind these opportunities and makes the most of their potential.”

Frasers Group slumps into the red

Get back to networking at our exclusive Leicester Summer Barbecue

Cases rise in the Midlands as fraudsters take advantage of Covid-19...