East Midlands cities set for slow growth over next 12 months

A new economic report has highlighted the “significant challenges” for the economies of Nottingham, Derby and Leicester with all three cities set to produce “relatively slow” growth over the next 12 months.

The UK Powerhouse study, which has been produced by Irwin Mitchell and the Centre for Economics & Business Research (Cebr), analyses 50 of the largest local economies by employment and GVA growth.

In the latest report, Derby is ranked 11th for year-on-year GVA growth in Q4 2022 with its economy due to increase in size by 2.9%. Leicester’s economy is predicted to grow at a slower rate of 2.6% whilst Nottingham, with the largest economy in the region, is set to see growth of 2.3%. 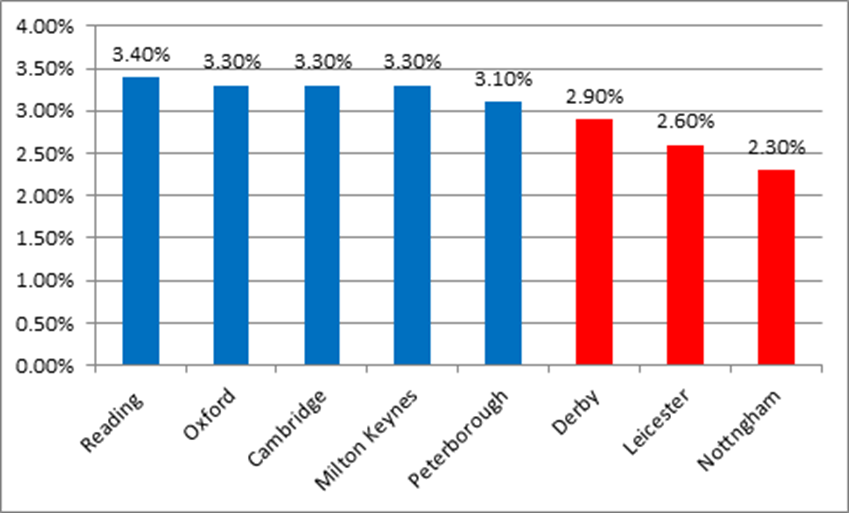 Nottingham’s rate of growth is a full percentage point behind hotspots in the South including Reading, Oxford, Cambridge and Milton Keynes.

Despite Nottingham’s GVA growth being the lowest in the region, its expected employment level growth in 2022 of 1.4% is higher than Derby (1.1%) and Leicester (0.8%).

Similar to GVA levels, the levels of employment growth with a much slower in East Midlands than they were in hotspots such as Oxford (3.2%), Chelmsford (2.5%) and Cambridge (2.5%).

Hannah Clipston, partner at Irwin Mitchell, said: “The UK’s economy has undergone significant change over the last two years and this report highlights that the recovery is unlikely to be linear or even uniform.

“Over the next 12 months our report predicts that manufacturing’s output will grow by 3.5% whilst for hospitality it will grow by 35%. This has a huge impact on the variations that we are seeing in terms of growth in different locations and should be considered by the government as it looks to level up.”

Irwin Mitchell’s report also examines to what extent disruption in the economy leads to innovation.

Clipston added: “Businesses have been incredibly resilient over the last couple of years and have faced many disruptors including Covid, labour shortages, supply chain issues and high fuel costs.

“Our latest study recommends that irrespective of the sector they’re in, organisations should be adopting technology more quickly and adapting to the UK’s new status after Brexit.

“All of this will require a shift in approach and for innovation to be celebrated and nurtured more than it is currently. It’s vital that businesses are encouraged to follow this path and receive the right level of support in order to help them succeed.”