A vision to create 6,000 jobs, over 400,000 sq ft of commercial and business space and 750 homes on the site of the former Broadmarsh shopping centre has been revealed this morning (December 7).

The Greater Broad Marsh Advisory Group has published its plans for the 20-acre site in the centre of Nottingham. The site was handed back to Nottingham City Council after the collapse of shopping mall operator intu last year.

Heatherwick Studio, led by the highly-acclaimed British designer Thomas Heatherwick, and Stories, the development company, were commissioned to work with the Advisory Group on the creative vision for the city centre site and advise on how Nottingham can deliver the project.

The Advisory Group believes the new Vision published today gives Nottingham a “once in many generations” opportunity given the size, scale and position of the site and would offer “social and economic opportunity to Nottingham on an unprecedented and historic scale”.

The development, which the Advisory Group thinks will take 10 years to fully deliver, will generate 3,000 jobs in the build and 3,000 new jobs once development is complete and create more than 750 new homes and over 400,000 sq ft of high end business and office space.

The key elements of the plans include:

• Rebuilding The Lost Connections. The vision aims to reinstate many of Nottingham’s lost street connections and rebuild them for the future of the city, reconnecting the whole of the centre, both physically and with its history.

• A New Green Heart. At the heart of the Vision is the creation of a new ‘Green Heart’ for the city centre. This wildlife-rich green space, which will permeate the whole site and weave in and out of the Frame, will aim to create a beautiful, tranquil core to the city. It will be set within 3.5 hectares of common ground – high quality public realm that permeates the zones across the 20 acre site.

• Living by the Nottingham Castle. On the west side of the site, looking up at Nottingham Castle and just yards from the Robin Hood statue, the Vision creates over 750 new homes. Located within walking distance of the train station, these would be prime location homes in the heart of the city.

• Work by the New Green Heart. To create an engine room for the city’s growth aspirations, the Vision includes new commercial and mixed use buildings, creating high end business and office space, including conference space, and high quality ground floor retail. The buildings will have the capacity to accommodate over 3,000 jobs.

• The retention of ‘The Frame’. The creative response from Heatherwick Studio, and endorsed by the Advisory Group, is to keep some of the structural frame of the Broadmarsh shopping centre and give it new life and meaning. Under the key themes of play, performance and food, it could provide a place with a diverse range of uses that brings people together.

• Sleep Above The Caves in a new Art Hotel. The Vision proposes to rejuvenate Nottingham’s unique cave network creating a new entrance and transforming the existing Severns House into a hotel, providing the opportunity for tourists to sleep right above the caves and forming part of a new heritage and culture trail through the city centre.

A new body, provisionally called The Broad Marsh Development Partnership could now be formed and should have the sole responsibility and accountability for the critical delivery functions.

The Advisory Group believes the next stage of the project, lasting 2-3 years, will require around £5-6m of investment, and that the priority should be demolition, masterplanning, legal work on title, and preparation to take the Vision to the private and public sector markets.

The Advisory Group says that the return on investment would be “unprecedented in the city’s history”. A physical development worth in the region of £500m will create jobs, new homes, new commercial space, increased tourism and hotel spend, business relocation and increased footfall in the city, it says. 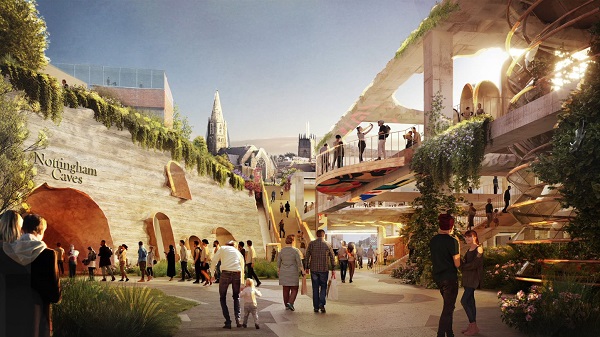 Independent chair of the Greater Broad Marsh Advisory Group, Greg Nugent said: “Out of the adversity of the collapse of Intu comes a chance for Nottingham to build a new kind of city centre. Thomas Heatherwick’s vision creates a blueprint for a City that wants to reinvent itself, ready for life beyond Covid-19.”

David Mellen, leader of Nottingham City Council, said: “I would like to thank the Advisory Board, Heatherwick Studio and the team at Stories for their creativity, hard work and ambition. When Heatherwick Studio was commissioned to create a new vision for Broad Marsh, there were some key things I was keen for it to include. I think Thomas and his team have delivered on all of them. They have clearly listened to the feedback from the Big Conversation and captured the wide range of views and ideas put forward in what was the Council’s biggest engagement exercise to date. They have used the extensive footprint of Broad Marsh to ensure the Vision provides something for everyone.

“It includes a substantial green space via a ‘green heart’ at the centre of the vision. It will lead to over 750 homes and 6,000 jobs for local people. By proposing to make some use of the existing frame, reducing the waste and carbon emissions from new construction, it is sustainable, something which is very important for the city’s ambition to be the UK’s first carbon neutral city by 2020. And it respects and promotes the city’s rich heritage by opening up views to the Castle, enhancing the Caves, one of the city’s hidden gems, and reestablishing old street patterns.

“Now we will begin the important work necessary to test the new Vision and our ability to realise it. We have said all along that this isn’t something the Council can or would want to do on its own. We will continue to work with colleagues on the Advisory Group to develop a Masterplan for the space and secure the investment needed from public and private sector partners. This will take time to get right but people will see major changes soon with the opening up of the area between Collin Street through to Lister Gate as part of the creation of the ‘Green Heart’.”

M1 closed for most of the day near Nottingham