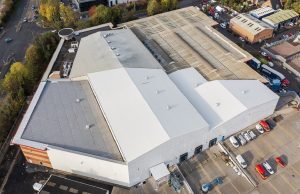 The Wilkins Group has extended its manufacturing facility

Wilkins says the multiple-title-winning ex-super-middleweight was “the obvious choice” to cut the ribbon on the facility – not least because his uncle, Mick Froch, has worked there for 46 years.

The pugilist’s childhood home also used to back onto the factory, and he recounts being chased off the site by security guards on several occasions.

Froch said: “Wilkins has been there for as long as I remember, so I’m delighted to return to support the opening of their impressive new factory.

“It’s quite funny and a little bit ironic that I used to be chased off the site when I was a kid – but now they’ve actually invited me there in an official capacity. At least I won’t have to climb over any garden fences!

“When I think of the Wilkins Group, I think of my childhood and my uncle Mick, who’s still working there. They’re very fond memories.”

Justin Wilkins, director at The Wilkins Group, said: “We’re so pleased that Carl threw his hat in the ring and agreed to come along and open our amazing new factory.

“Asking him to open the new premises was a unanimous decision and his involvement will really help to make this a knock-out event.

“The fact that he’s from Gedling in Nottingham, has family members connected to our firm and, of course, is into ‘boxing’ like we are, will make this a truly memorable occasion for everyone who’s worked so hard to get to this point.

“At this momentous stage in the company’s history, I would like to take this moment to thank all of our dedicated staff in playing their part in assisting us in our growth strategy.”

‘Much-needed’ speculative development gets underway in...

Flannels set to clean up with new Lister Gate store